Food. The noblest of all human pursuits.

From ancient emperors to the fast-food restaurants of modern America, the enjoyment of food has always been an integral part of our lives. Despite their troubles, our ancestors still found the time to turn the items around them into delectable delights.

Here are 10 of the most interesting ancient foods, including one that could kill you if you’re one of the rare people whose body lacks a particular enzyme. 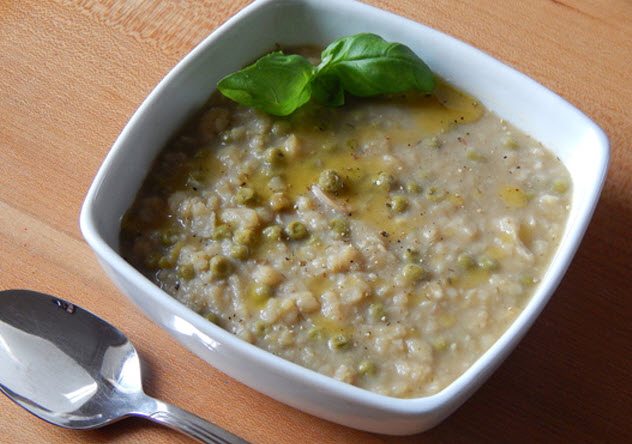 What might be Hannibal Lecter’s favorite meal on this list, maccu is an ancient Roman dish made primarily from crushed fava beans. Initially created on the island of Sicily, this particular dish spread once the Sicilians were integrated into the Roman Empire. Widely known as some of the best cooks in the Roman Empire, the island dwellers were introduced to the bean sometime in the distant past, though the exact date is unknown.

As for the preparation, the fava beans were boiled with any number of herbs and spices. Olive oil was added to the mixture, and it was eaten as a soup.[1] Leftovers could be poured out, left to harden, and then eaten as a snack. (Sometimes, they would be cut up, floured, and fried before being eaten again.) Though a rarity in today’s Sicily, some restaurants carry the foodstuff as peasant food, meant to play on our nostalgia for ages past.

However, fava beans can cause illness and even death in some people who lack the enzyme glucose-6-phosphate dehydrogenase. Certain people without this enzyme cannot process the toxins in fava beans, so their red blood cells are destroyed by these toxins. This rare hereditary condition occurs more often in the Mediterranean than in the US. 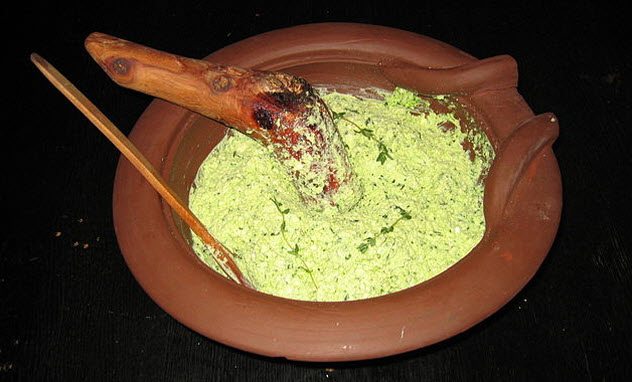 Staying in ancient Rome, moretum was a kind of cheese spread that Roman peasants used on the various breads which they ate. The great poet Virgil, more widely known for the epic Aeneid, compiled a collection of poetry called Appendix Vergiliana. (Ancient sources believed that Virgil was the author of most of them, but it’s more likely that he merely assembled those written by others.)

One of the poems discusses the foodstuff, and it is eponymously named “Moretum.”[2] In the poem, the peasant collected ingredients from his land (garlic, herbs, and butter) and then produced the meal, all while talking and singing to his slave.

There was also a widely eaten variant involving pine nuts which is remarkably similar to modern-day pesto. As for the name, since all the ingredients needed to be crushed together in a mortar, it only made sense to name it after that. 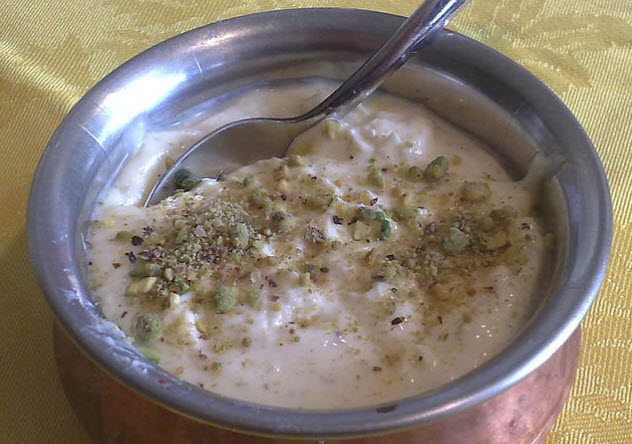 Deriving its name from the Sanskrit word for “milk” (ksheer) and the Persian word for “sweet” (qand), shrikhand is a dessert made from fermented milk. The exact origins are lost to history, but tradition says it arose in ancient western India.

Traveling herdsmen were said to have hung either curd or yogurt overnight, thickening it in the process.[3] Later versions of shrikhand contained various other ingredients, including sugar, spices, and nuts.

Most commonly found in India today, shrikhand is served as a breakfast dish in the North. In the South, they’ve kept its tradition as a dessert. As for the actual creation process, milk is heated and then cooled to room temperature, with a culture being introduced to make a firm curd. The resulting curd is strained to remove the whey and then mixed with the desired additional ingredients. 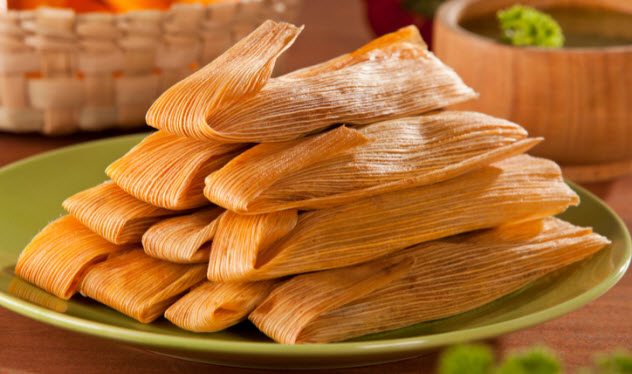 An extremely traditional Mesoamerican foodstuff, tamales have been cooked since at least 1500 BC. Some evidence actually points to as long ago as 8000 BC.

The word itself is derived from the Nahuatl word for “wrapped food” (tamalii), and the correct singular form is tamal. (In English, it’s commonly spelled and pronounced “tamale.”) Tradition holds that the Maya would make their cornmeal delights both filled and unfilled, with the fillings ranging from fish to beans to eggs.[4]

Aztec tamales were quite similar, with some of their descriptions coming from Bernardino de Sahagun, a Spanish priest who wrote about his experiences in the New World shortly after the Aztecs were conquered. (They also had “dessert” tamales, which were filled with fruit or honey.)

Tamales, especially those made of ground amaranth, also took on a religious connotation due in part to their use as offerings to various gods. As a result, the Catholic Church banned tamales and amaranth. Execution was the likely punishment for those caught making this food.

As for the tamales’ wrapping, which serves to help the steaming process, corn husks are the most widely used. However, banana leaves are more common in tropical areas. 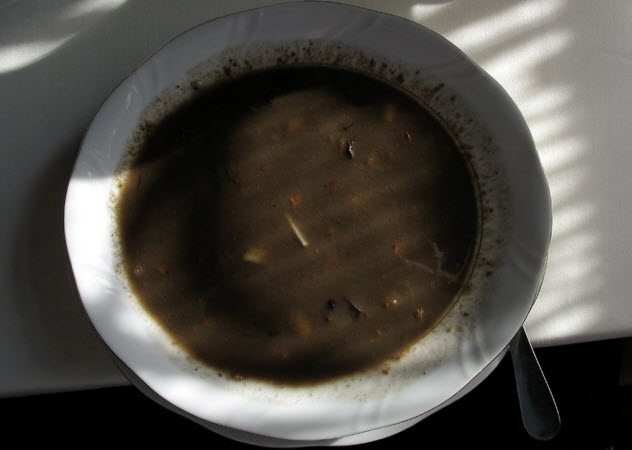 Leave it to the Spartans of ancient Greece to have one of the most reviled foodstuffs in history. “Black soup” (melas zomos) was a traditional soup or broth eaten by soldiers in the army. Adding to their legacy of caring for nothing but warfare, it was only eaten for sustenance, though some say the Spartans enjoyed the soup. Made from boiled pigs’ blood, pork, and vinegar, black soup was infamous even in its own time.

Supposedly, one Italian who tasted it said that he finally understood why Spartans were so willing to sacrifice their lives in battle if black soup was all they had to eat. Another tale has a king of Pontus who wanted to try the soup. He had a Spartan chef prepare it for him, and with the first spoonful barely in his mouth, he was disgusted.[5] The chef’s response was that the king should have first bathed in a Spartan river, implying that one had to be Spartan to enjoy it.

Unfortunately, or perhaps not, there is no specific recipe surviving to this day. (However, various blood soups are still enjoyed throughout the world.) 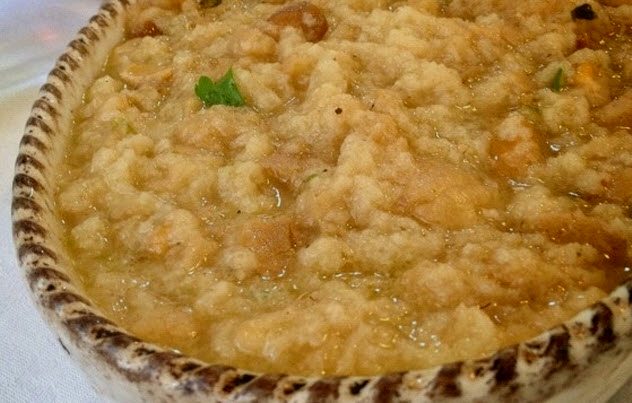 Acquacotta, another peasant’s dish, originally came from western coastal Italy in an area known as the Maremma. Literally translated as “cooked water,” this particular foodstuff is a relatively simple soup. Farmers and other laborers often just gathered whatever wild herbs and vegetables they could find.[6] Unsalted bread, often stale, was then added to the soup to soften the bread and make it edible.

The more prosperous proponents of acquacotta would top it all off with an egg, poached by the heat of the soup. Legends abound about the initial creation of the dish, with some bearing a striking resemblance to the legendary creation of stone soup. In one of many versions, a poor person convinces others to add ingredients to his pot, which began with nothing but water and a stone inside it. Eventually, a delicious soup was created and everyone enjoyed themselves. 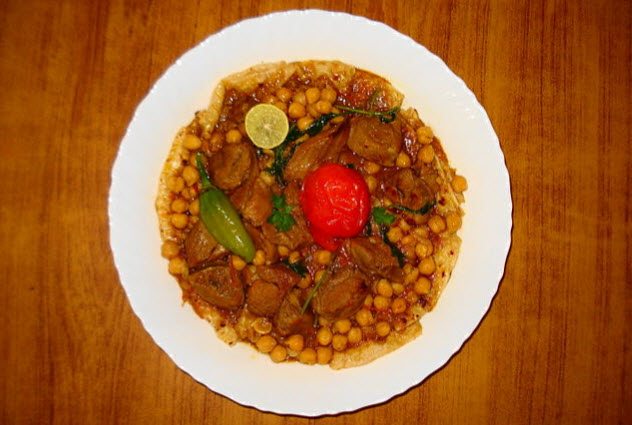 Tharida (aka tharid) is an Arab soup dating as far back as the time of Muhammad. Created by a group known as the Ghassanids, this dish combines stewed meat with broth and bread crumbs. Traditional tharida has the bread crumbled by hand.

Although the Ghassanids are Arab, they remained Christians until their kingdom was finally annexed. However, tharida’s allure transcended those bounds, becoming increasingly popular among Muslim Arabs.

Muhammad compared the dish to his favorite wife, Aisha, by saying that tharida surpassed all other dishes, much like Aisha surpassed all other women.[7] Thanks in no small part to his love of tharida, it was one of the few traditional Arab foods which spread far across the world. Variants could be found from Morocco to China.

Each new culture added their own unique flavor, and today, there are hundreds of versions of tharida. (Moorish Spain used eggplants in their form of tharida.) 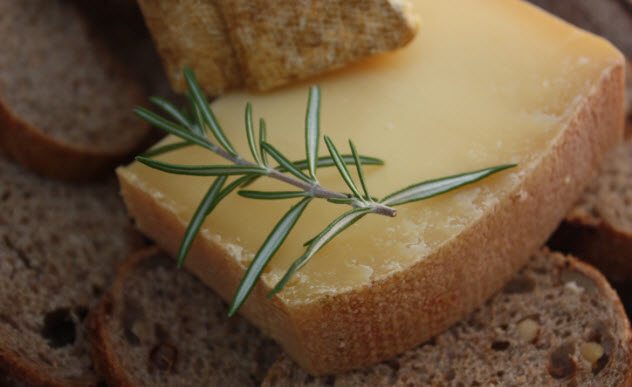 Dating all the way back to the rule of the Gauls, Cantal cheese is one of the oldest cheeses in the history of France. A semihard cheese, this particular type is often referred to as fourme by locals, a name which was used by Gregory of Tours, the famed historian of France. In his depiction of an ancient pagan religious rite, various offerings were thrown into a specific mountain lake, with cheese being one of the items tossed into the water.

The Roman author Pliny the Elder also wrote about the cheese in the first century AD.[8] Much to the woe of Roman cheesemakers, Pliny said that the best cheese came from Nimes, a city in southern France.

Relatively unchanged through the centuries that followed its creation, Cantal cheese rose to prominence during the reign of Louis XIV of France. Today’s Cantal cheese is sold much younger than it traditionally was, often with much less salt as well. 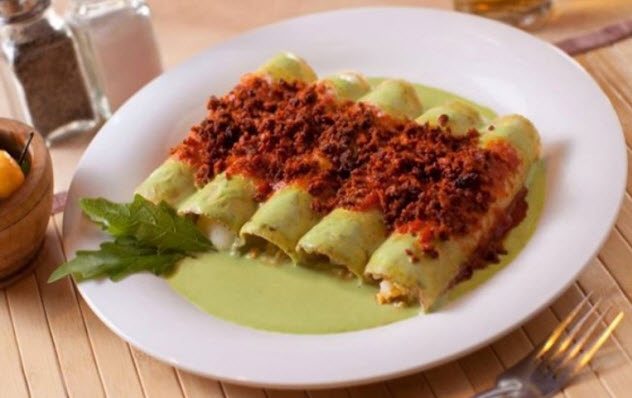 A pre-Columbian enchilada of sorts, papadzules is a traditional dish from the Yucatan Peninsula. Traditionally made by the Maya, the dish consists of tortillas, preferably corn, dipped in a sauce made from pumpkin seeds. (Other varieties of squash may be used instead.) Chopped hard-boiled eggs are placed in the tortilla, and it is wrapped shut and drenched in a tomato sauce.

The papadzules of today have droplets of squash or pumpkin oil all over the surface. Controversy abounds as to whether the Maya could have produced the same effect without more advanced technology. (They were likely capable of producing different kinds of oil which they may have used instead.)

As for the name, the story goes that it meant “food for the lords” and the papadzules were fed to the Spanish conquistadors who encountered the Maya. (Other sources say the name is derived from the Mayan words for “food” and “love.”)[9] 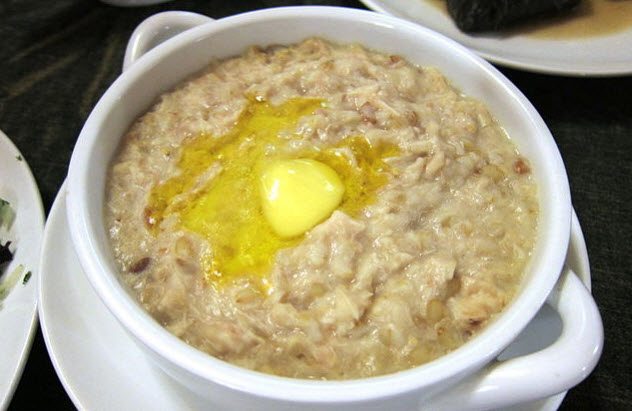 Not to be confused with the Tunisian hot sauce of the same name, harissa is a traditional Armenian dish. A ritual dish popular during festivals and on other religious days, it is a thick porridge made from wheat and chicken or lamb.

During fasts which require giving up meat, herbs are used in place of meat. Harissa can be difficult to prepare as it is cooked over a low heat and requires constant stirring for a long period of time. However, part of its cherished value in Armenian culture comes from the time spent.

The name of the dish is legendarily said to have come from Gregory the Illuminator, the patron saint of Armenia. A meal of sheep was being prepared, and it wasn’t going to be enough to feed everyone. Saint Gregory had some wheat added to the pot. When he noticed it was sticking, he proclaimed, “Harekh!” (“Stir it!”)[10]

For a long time afterward, harissa was a traditional meal given to the poor by Armenian churches.

Read more fascinating facts about ancient foods on 10 Foods That Exist Because Of Ancient Genetic Engineering and 10 Fascinating Facts About Ancient Cuisine.