Always eager to prove their superiority to their Western foes, the North Korean regime has a reputation for making extraordinary claims and exaggerating its achievements. When it comes to technology, North Korea has been especially apt to tout its many homegrown innovations.

The ruling ideology of the country, Juche, calls for self-reliance of the Korean nation. In this spirit, these inventions serve as propaganda tools, helping the regime to deceive its citizens into believing that their country is on an equal technological footing with the rest of the world. However, looking a little closer, one will find that most of these homegrown “innovations” are usually nothing more than inferior-quality copies of foreign products. 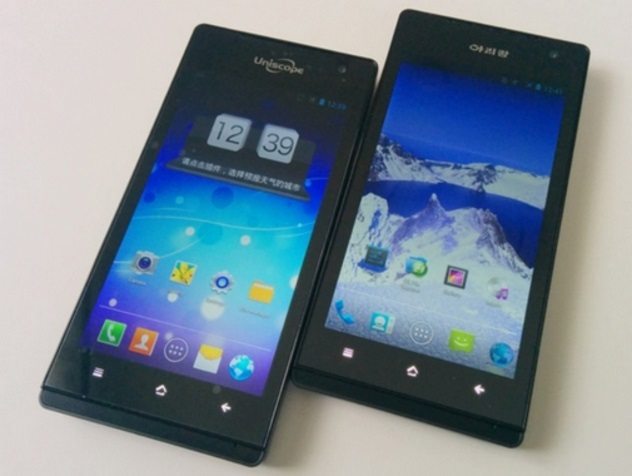 The Arirang, named after a Korean folk song, is North Korea’s first attempt at manufacturing its own smartphone. The device, announced in 2013, was reported by North Korean state news to be entirely built within the country. Supreme Leader Kim Jong Un himself personally inspected the phone in an effort to help promote it.[1]

The phone appears to run on a modified form of the Android operating system, but the actual functionality of the device is questionable, given that there is no outside Internet access in North Korea. Koryolink, the country’s sole cell service provider, only permits domestic calls and access to a small amount of approved websites on the country’s “intranet” service.

The design of the phone itself has been called into question. Experts have noted the similarity of the design to the low-end Chinese Uniscope U1201 smartphone (which you can see for yourself in the above picture). There is speculation that the Arirang may actually be produced in China and shipped to North Korean “factories,” allowing the regime to take credit for the technology. 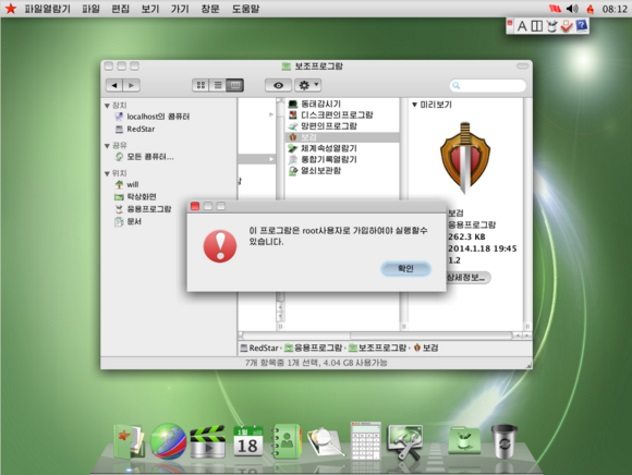 Red Star OS is the official operating system of North Korea. Seeking to distance itself from the American-developed Windows operating system, North Korea began developing its own in 2002. Red Star OS superficially resembles Mac OS X but is actually a heavily modified Linux distribution. The OS includes a modified version of Firefox called Naenara, Korean for “my country,” on which the user can access the previously mentioned intranet.

The entire operating system was built with control of information in mind. Red Star has the ability to “watermark” files in order to trace their distribution, allowing the North Korean state to crack down on foreign media transferred using USB drives. The OS is very resistant to tampering; if a user attempts to make any changes such as disabling the firewall, the computer will automatically reboot itself.[2] 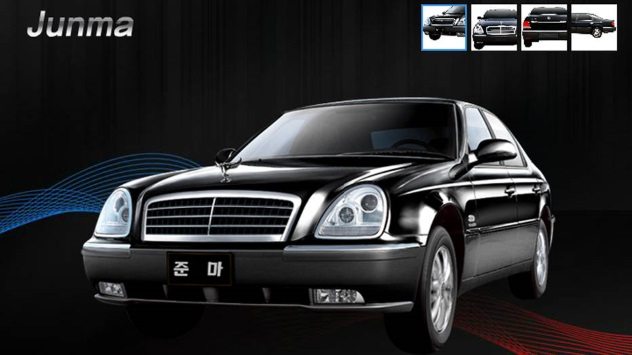 The Junma is a knockoff luxury car built by Pyeonghwa Motors, a joint venture between a politically active South Korean church and a North Korean government-owned business. Pyeonghwa Motors exclusively owns the rights to automotive production and sale in North Korea and is the only business that is known to run billboard advertisements in the country.[3]

The Junma is the top-of-the-line “luxury” car in Pyeonghwa’s lineup. This sedan is based on a South Korean car, itself a copy of a Mercedes-Benz E-class from the mid-1990s. Although the most powerful Pyeonghwa car, the Junma’s 197-horsepower engine pales in comparison to modern sports cars. With the average North Korean citizen being barred from driving, the Junma is presumably intended for high-ranking government officials.

The production statistics for the Junma are completely unknown, but the overall car production of Pyeonghwa Motors is estimated at about 1,000 units per year. Strangely, the company does export some cars to Vietnam, so if you are eager to get yourself one of these “luxury” rides, you might be able to buy one there! The Samjiyon is a North Korean tablet computer first released in 2012. The tablet runs a standard Android build and costs $200. Like the Arirang smartphone, the built-in browser only allows access to the heavily controlled government intranet. The device doesn’t offer Wi-Fi support, but it does have a TV tuner fixed to the frequencies of North Korea’s two state-run television channels.

The device ships with a surprising assortment of apps. A copy of a Chinese tank game and a translated “Angry Birds Rio” are among the entertainment features. Also included is a reading app loaded with books about Kim Il Sung, etiquette for children, and language learning. Despite being an Android device, the Google Play Store app (along with all other Google apps) is absent, making it impossible to download any other apps. What you see is what you get with the Samjiyon.

According to a review done by a tourist who was able to buy one of the devices at a Pyongyang gift shop, the tablet is “surprisingly impressive.” The specs of the device are comparable to others from 2012, and the reviewer remarked that responsiveness and speed of the Samjiyon are impressive, with nearly no animation lag to speak of.[4] It is suspected that the device might actually be manufactured at least in part by a Chinese company. 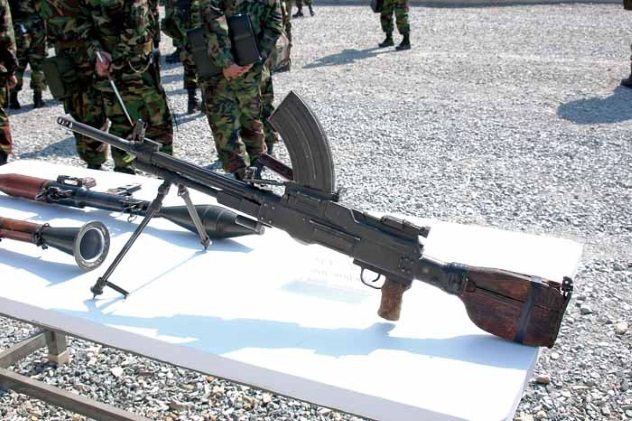 The Type 73 light machine gun is one of the only homegrown firearm designs used by the North Korean Army, which primarily arms its troops with copies of old Soviet weaponry. The Type 73 itself is a strange patchwork of Eastern Bloc weaponry, with a body resembling the Soviet PK machine gun and the feeding mechanism of the Czechoslovakian Vz.52. The Type 73 fires from a dual-feed system, meaning that it can fire using either a top-mounted box magazine or a belt of ammunition. The weapon sports a wooden handle and buttstock, a far cry from the lightweight plastic composite accessories of most modern machine guns.[5]

Surprisingly, the gun has been spotted in the hands of militants in Africa and the Middle East. Iran received several of the weapons from North Korea during the Iran-Iraq War. Later, the weapons were found being used by pro-Assad forces in the Syrian Civil War and Houthi rebels in Yemen. Many of the weapons used in these conflicts might actually be of Iranian origin. After receiving their initial shipment from North Korea, Iranian factories mass-produced their own copies of the design, which helps explain the Type 73’s widespread prevalence. For being a copy of a copy, the weapon seems to hold up surprisingly well. 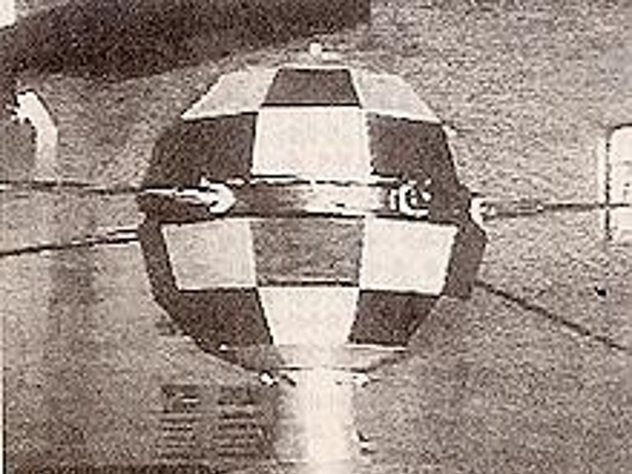 Kwangmyongsong-1, meaning “Bright Star 1,” was North Korea’s first satellite, launched in August 1998. The North Korean media claimed the launch to be a resounding success, reporting that the satellite broadcasted patriotic hymns in Morse code as it orbited the Earth. The only problem with this seemingly impressive accomplishment is that the satellite was not detected at any American tracking station. Ultimately, experts concluded that it had probably only entered a low orbit before falling back into the ocean.

Like many other technologies on this list, Kwangmyongsong-1 may have been a Chinese knockoff. The polyhedral design of the satellite is suspiciously similar to the China’s first satellite, the Dong Fang Hong I, which itself shows similarities to an earlier American satellite. The questionable design and function of the satellite didn’t stop the North Korean state media from proclaiming it a success, declaring that the launch “encourages the Korean people in the efforts to build a powerful socialist state under the wise leadership of General Secretary Kim Jong Il.”[6] 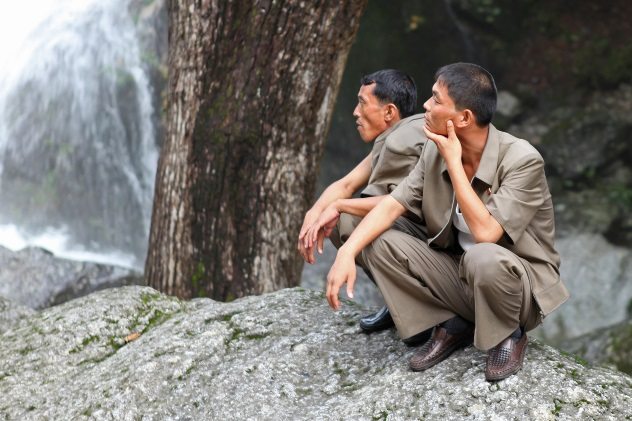 The origins of Vinylon fiber can be traced back to the Imperial Japanese rule over Korea. In 1939, a Korean chemist, along with his Japanese colleges, first developed this synthetic fiber. The fiber, produced using polyvinyl alcohol, was claimed by the Kim regime as their own when its inventor defected to North Korea after the Korean War. Placed under heavy economic sanctions by the outside world, North Korea lacked the raw materials it need to be self-sufficient. As a result, the North Korean regime promoted Vinylon, which could be easily made using local materials.[7]

Vinylon fiber quickly became a powerful propaganda tool for the North Korean government. It was dubbed the “Juche fiber,” named after the official ideology of the country. The North Korean government built a massive “Vinylon city” production plant and heavily promoted the product, which it viewed as an example of North Korean self-reliance. In a propaganda song entitled “How Grand Socialism Is!” the singers praise how “the vinylon fabric pours out like a waterfall.”

Ironically, Vinylon fiber, just as the Juche ideology it represented, proved to be less than successful in the long run. Once produced in huge quantities, Vinylon declined after the widespread adoption of other synthetic textiles such as nylon. At present, North Korea imports mass amounts of foreign textiles for uniform production—so much for the Juche fiber. 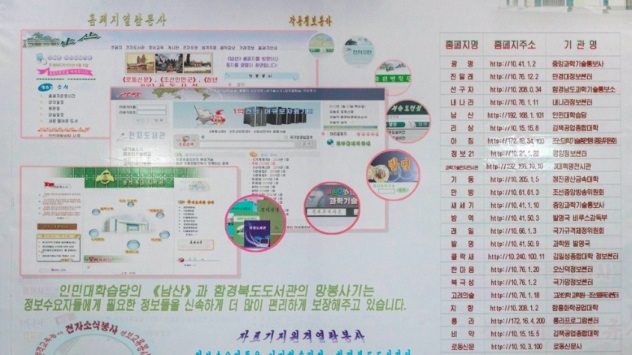 As previously mentioned in this article, North Korean citizens cannot freely access the global Internet but are instead limited to a small amount of government-approved domains. This national intranet service, known as Kwangmyong, is only accessible from within the country. The Kwangmyong, like North Korea as a whole, is very secretive, but the small amount of available information about the system suggests that it is quite limited in scope. The intranet is primarily used by libraries, universities, and other government organizations.

There are an estimated 1,000 to 5,000 websites on the Kwangmyong—all government-controlled. Among these websites, you will find the usual state news agencies, complete with a special section on the website, “Supreme Leader’s Activities,” reporting the recent actions of Kim Jong Un. Aside from propaganda and official business, the Kwangmyong is also equipped with its own search engine, social media site, and messaging service.[8]

The system has a few unique features that might surprise regular Internet users. A photo of a poster in a North Korean library taken by a tourist shows that the websites’ addresses are composed entirely of numbers. This numeric format, the IP address of a website, is used by computers to route web traffic but is often supplemented by a word-based domain name for easy access by people. Just imagine having to type in a string of numbers every time you want to visit Listverse. Another unique feature of Kwangmyong websites is that the written names of the Great Leaders Kim Jong Il and Kim Il Sung must be coded to appear bolder and 20 percent larger than the rest of the surrounding text. 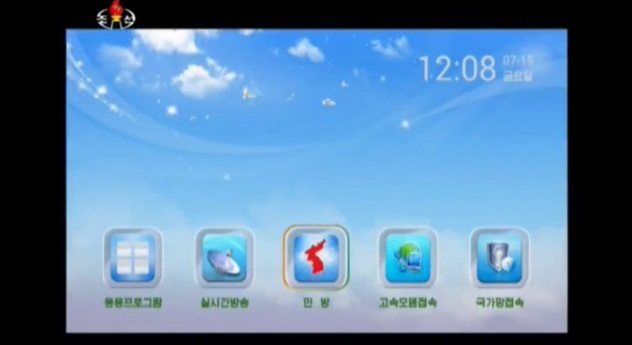 The privileged few North Korean citizens with disposable income have the option to watch programs on-demand through a service known as Manbang. The service, launched in 2016, streams content to televisions through a set-top box. As with the intranet, the content on Manbang is mostly limited to state-controlled news and movies, but there are also language-learning programs teaching English and Russian. The Hwasong-10, also known as the Musudan, is one of the newest North Korean ballistic missile innovations. Capable of reaching US military bases in the Pacific, the Hwasong-10 has been used in many controversial missile tests that have led to increased tension in the region.

Unsurprisingly, North Korea was not able to develop this technology completely independently, relying on help from friendly Communist nations. Work on the missile began in the 1990s, when North Korea contracted Russian engineers to help build a missile based off of an older Soviet design.

The first two tests of the new missile failed at launch, and the third test traveled only a short distance. The fourth test actually exploded on the launch pad, supposedly killing launch site personnel. Later tests resulted in an increased flight distance, concerning United States military officials that the missile could be used to target Guam.[10]

Brett is an American studying in Hong Kong. He also writes for the South China Morning Post. You can find his other writing here.