The animal kingdom is constantly under a microscope, having been gazed upon by thousands of researchers over the centuries. Even so, every year, mind-blowing new fauna appears and old familiars break the rules in dramatic ways.

The most wonderful discoveries are often the weirdest—things that burst, bones that glow, and a language that resembles human speech in almost every way. 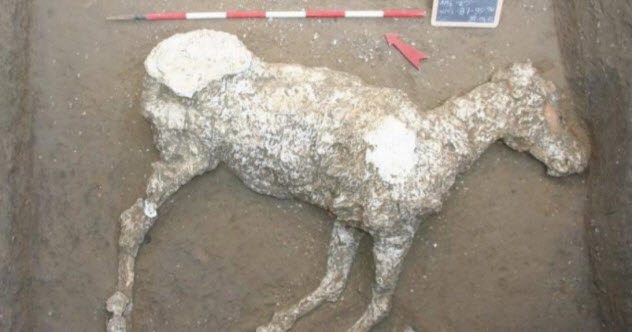 The disaster of Pompeii is mostly remembered for its gray human bodies frozen in agony. Around 2,000 perished when the Mount Vesuvius volcano overcame the Roman city in AD 79.

Researchers have found a few animals skeletons, including mules and donkeys, but only managed to make two successful casts, that of a dog and pig. These casts are what visitors see when they look at the “bodies” of Pompeii today.

In 2018, archaeologists were clearing the ruins of a stable outside the city when they found the first horse of Pompeii. A clearly defined ear showed that this was not another mule. The animal had perished inside the stable and was found on its side where it had fallen.[1]

In life, the horse stood barely 152 centimeters (5’0″) tall at the shoulder and would have been considered small by today’s standards. But it was by no means unimportant. Pieces of a bronze-and-iron metal harness unearthed near its head suggested that the horse was used during parades.

9 Chameleons Glow In The Dark 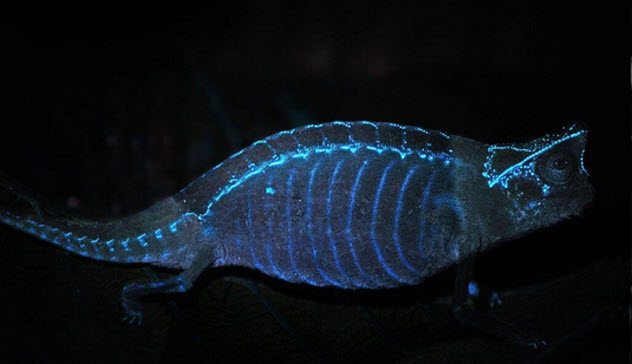 In 2018, researchers placed a few scaly subjects in the dark and zapped them with a UV lamp. In response, many of the chameleons began to glow an electric blue.

The bright biological light had nothing to do with the creatures’ famed ability to switch shades. Remarkably, the neon radiance came from their bones. This ability of bones to glow under UV light is not new to science and is often used by those seeking fossils.

But living skeletons are wrapped in muscle and skin, making it harder to detect. This newly identified ability in chameleons was easy to spot thanks to a more shallow structure.

The reptiles’ skeletons are lined with bony protrusions that almost touch the skin, allowing for an unobstructed fluorescence. Since chameleons can see ultraviolet light, they probably glow to look romantic (males have more shiny protrusions) or to communicate.[2]

Not every chameleon has wattage, though. The trait is particular to rain forest–dwelling species where fluorescence flourishes in dark habitats. Interestingly, their skin could also boost the effect by filtering wavelengths of blue light. 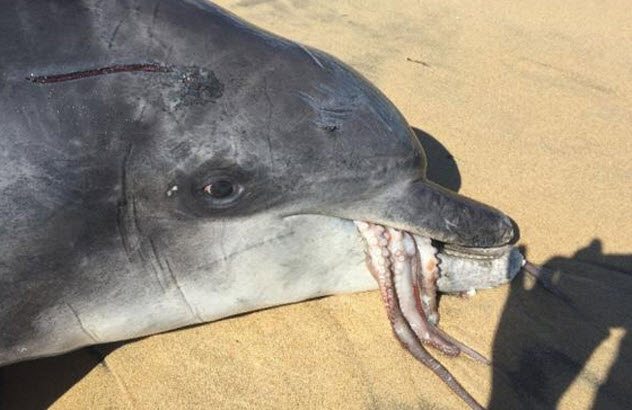 In 2015, a dolphin washed up south of Perth. It was a male bottlenose in peak condition. The cause of death bulged from its mouth—a Maori octopus. The mammal appeared to have choked to death, but the finer details made this case unusual. From the onset, it was something that had never been recorded before.

Dolphins hunt these creatures, but never before did one fatally gag on an octopus. During the autopsy, the smallish lump protruding from the bottlenose’s mouth surprised the doctor by turning out to be a lengthy specimen. The tentacles measured 1.3 meters (4.2 ft) long, and the cephalopod weighed 2 kilograms (4.6 lb).

To gulp down larger prey, dolphins temporarily disrupt their own breathing structure by dislodging the tissue connecting the blowhole and larynx. However, the octopus wrapped a tentacle around the larynx and the dolphin could not rebuild its breathing system.[3]

He never choked on the octopus—it suffocated him. There is even a chance that the dolphin was actively killed by dead prey. After death, an octopus’s arms can remain reactive for quite some time. 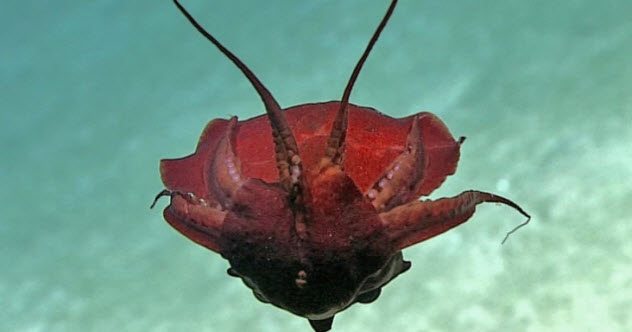 In the Gulf of Mexico floats a creature that may or may not be a squid. Even researchers who specialize in tentacled oddities have no idea what they’re dealing with.

NOAA’s Okeanos Explorer, a remote submarine, encountered the bright red animal in 2018 when the sub was thousands of feet under the sea. The creature had stubby arms, but other tentacles appeared to be missing. Strangely, the squid also swam like a nautilus.

What stumped biologists was its posture. Some arms were rolled up its back, some were underneath, and some stuck out to the side. This could have been a defensive posture because the squid was aware of the submarine.

Another possibly for the scrunched-up look is that the arms keep “marine snow” from falling off the squid’s back so that it can be harvested later. These food particles come from shallower waters and feed many deep-sea mouths.

If so, this survival tactic is a new one for the record books. Additionally, this could be Discoteuthis discus, a squid known only from fragments and which had never been seen alive.[4] 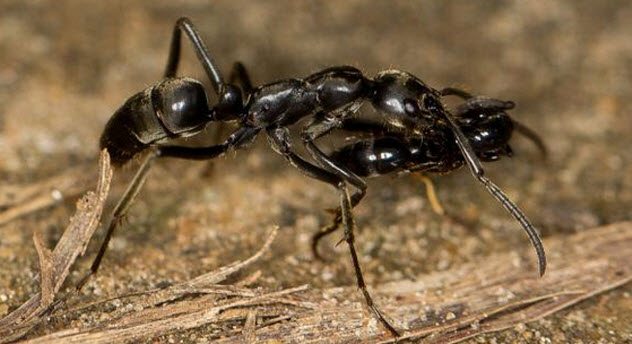 When matabele ants get hunger pangs, they like to march over to a termite nest and make a meal of the insects. Since termites are no pushovers, this always leads to a battle before dinner. Termites may have brute force, but the tiny sub-Saharan ant attackers have numbers, thanks to one unique behavior seen for the first time in 2017.

Matabele ants rescue their wounded comrades and carry them back home. No other ant species does this. By saving lives, their colonies are up to 30 percent bigger than if they had left the wounded behind.

Once snug and safe, the injured soldiers recover within days. Most rejoin the raids. Before getting fuzzy feelings because you believe that insects are showing compassion, researchers warn that empathy has little to do with the ants’ decision to pick up fallen friends.

Pheromones from the hurt ants’ mandibles trigger the paramedics to come running.[5] In fact, it is highly likely that the rescuers are not even aware that help was needed. 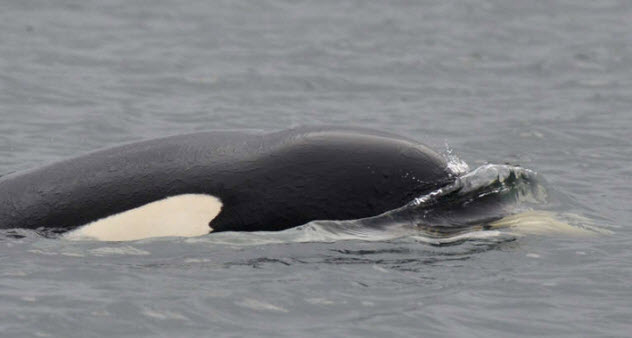 Jared Towers have been studying killer whale pods in Canadian waters for years. In 2016, the cetacean expert’s equipment lit up with frantic calls. They came from orcas northeast of Vancouver Island.

When Towers arrived to investigate, he found two family groups. The scientist recognized a 32-year-old male with his mother, and the pair was troubling another pod with a newborn calf.

As lethal aggression between killer whales is unheard-of, the scientist was shocked when the mother-and-son team worked together to kill the calf. They did not mutilate or consume the baby but simply drowned it. The calf’s mother could not stop them, even after she attacked the male so violently that he shook and blood flew.

Infanticide (the killing of an infant of the same species) has never been recorded among orcas. Researchers suspect that the pair attacked the family for the same reason that other species kill unrelated young—to pass on their own genes. The involvement of the adult male’s parent is the first hint that killer whale mothers help their sons (who often stay with them for life) with mating opportunities.[6] 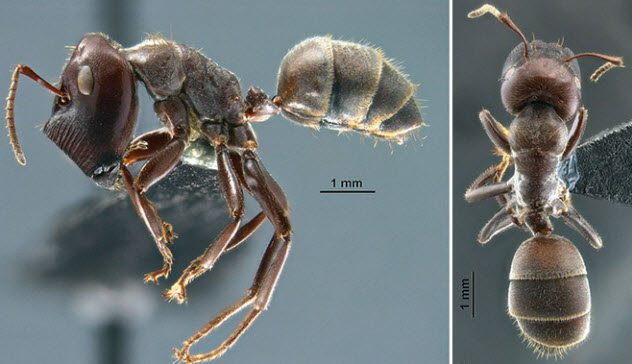 In the forests of Borneo, a new ant species defends its home in a really weird way. Discovered in 2018, Colobopsis explodens is full of toxic goo. When it encounters something perceived as unwelcome, the ant pops and splatters the enemy with a yellow poison. This tiny explosion is fatal to the popping ant but remains an effective weapon during territorial warfare with other nests.[7]

There are about a dozen ant species that burst in defense, but this one is by far the most bizarre. In addition, not every member of Colobopsis explodens goes kamikaze on the neighbors. Only the minor workers have the ability to sacrifice themselves.

The major workers, identified by their larger heads, also have a strange tactic to protect the colony. The entrance hole of the nest has a diameter that is a close match to the noggin of a major worker. When there’s danger, one ant simply jams its head into the front entryway, refuses to budge, and then nothing can invade the nest. 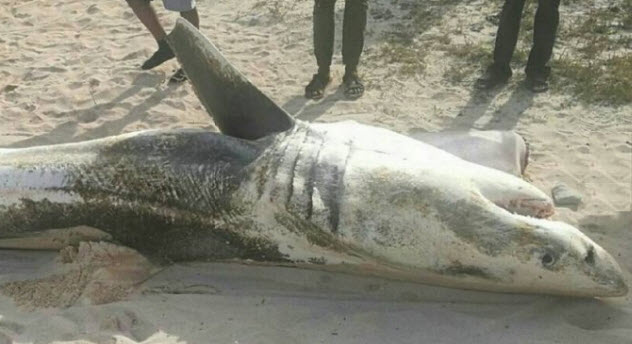 The fishing town of Gansbaai in South Africa does not mind being near shark-infested waters. Taking tourists to see the fearsome predators is critical to the town’s prosperity.

In 2017, something strange started happening when several great white sharks washed ashore on the beach. Though their bodies appeared several days or months apart, all the sharks had one thing in common—a missing liver. More disturbingly, when scientists examined the mutilated predators, they found that the organs had been extracted with surgical precision.[8]

The sharks were massive, with one female measuring 4.9 meters (16 ft) long. With scientists looking toward a bigger and bolder enemy, suspicion fell on local orcas. Killer whales are known to consume shark organs, but plucking out the liver while leaving the rest is a first for South African waters.

Orcas may fancy the shark livers because they are packed with healthy vitamins and squalene. Responsible for the production of vitamin D, squalene also makes cholesterol and steroid hormones. Then again, maybe the livers just taste awesome to orcas. 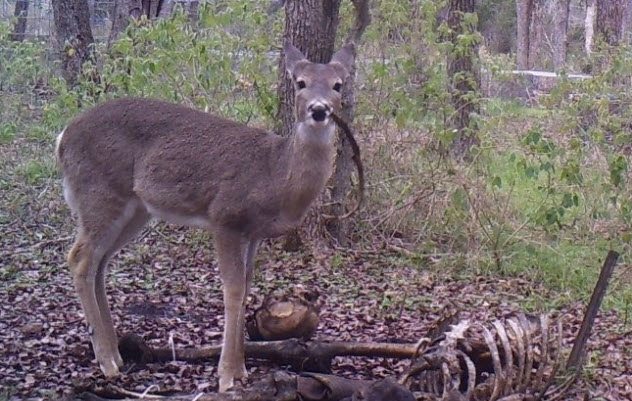 In Texas, a 26-acre piece of land regularly sees bodies being dumped in the woods. Far from being the local Mafia’s killing grounds, the land is a so-called body farm. Used by the Forensic Anthropology Research Facility from Texas State University, researchers study corpses in the wild.

In 2017, a human body was left outside to see how it decomposed and what animals interacted with it. One unusual visitor was a white-tailed deer. The herbivore showed up after the body had already been exposed to the elements for 182 days.

To the surprise of the observing researchers, the animal did something that no deer has ever been known to do—it ate some human. Choosing a rib bone, the animal proceeded to chew on it “like a cigar.”[9]

Far from being a deviant, the deer was probably just after the nutrient-rich marrow. Though no hoofed herbivore has ever been known to snack on a human in this manner, other species, like sheep, do gnaw on the occasional bone. 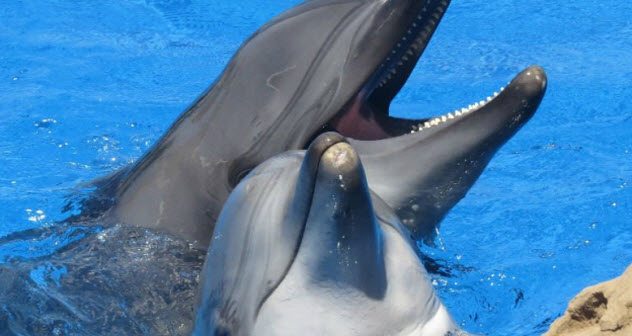 In 2016, two dolphins named Yana and Yasha chatted away in their pool while a microphone listened. When researchers analyzed the recording, they realized that the pair was not just squeaking at each other for the fun of it.

Yana would emit up to five pulsed clicks in succession. During that time, Yasha was quiet and responded afterward with his own “sentence.” Neither interrupted while the other clicked. Such a conversation between dolphins has never been recorded before, even though the marine mammals are known for their complex communication.

Previously, scientists thought that dolphins only uttered what seemed to be one-word sounds to signal food, emotions, or location. The two Ukrainian dolphins proved them wrong. By shifting volume and pace, the pulsed clicks formed sentences much like people would during a discussion.[10]

In fact, the chatty dolphins displayed all the trademarks that are present in human language. This enormous breakthrough proved that dolphins have a sophisticated spoken language of their own. Regrettably, scientists cannot decipher what Yasha and Yana talked about that day.

Read more amazing stories about animals on 10 Amazing Animals That Clone Themselves and 10 Amazing Ways Animals Are Superior To Man.