Drones have drastically changed the way we explore the skies and film breathtaking landscapes. As much as this revolutionary product changes our lives, however, it can pose a threat if it’s used for sinister purposes.

It’s disturbing to discover all the things that criminals can do with technology as advanced as this. With drones, they can exploit various kinds of privacy laws that aren’t as strict as they should be. This makes it easier for them to commit their devious acts of malevolence and get away with it. 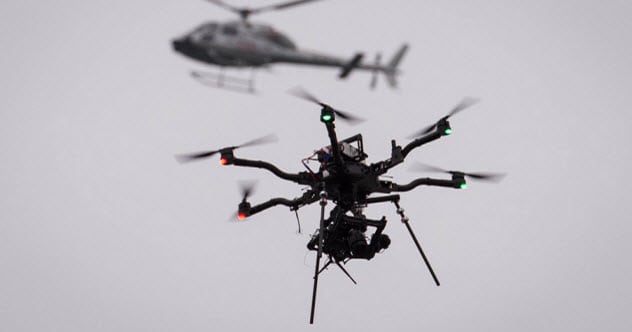 Everyone knows that when you go to an ATM to withdraw money, you need to be aware of your surroundings so that nobody sees you entering your personal identification number (PIN). Banks have even installed privacy screens and dividers specifically for this reason. Back in August 2016, a drone could be seen filming people standing at an ATM in Templepatrick, Northern Ireland, and possibly recording the input of their PINs.[1]

Once someone noticed the offending drone sticking its camera in other people’s business, it flew away and ended up colliding with a nearby taxi. Although a male suspect was forced to pay the owner of the taxi for damages, the police were unable to prove that the video footage was taken with criminal intent. 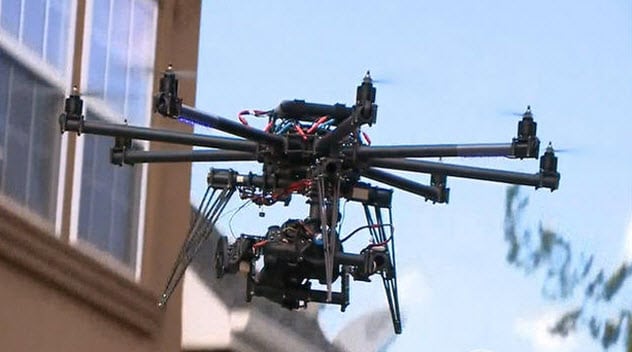 Instead of trying to smuggle in drugs the conventional way, a prisoner’s buddies thought out of the box—as in outside of the prison yard. They strapped 7 grams (0.25 oz) of heroin, 57 grams (2 oz) of marijuana, and 142 grams (5 oz) of tobacco onto a drone and sent it flying over the walls of the Mansfield Correctional Institution in Ohio.

Once the drone dropped the drugs for the intended prisoner, a fight broke out among the inmates. One of them grabbed the special delivery and threw it over the fence to another recreational yard.

Correctional officers managed to bring the fight under control with the use of pepper spray. They had to strip-search nearly 200 inmates to find the drugs, and the nine prisoners who were mainly involved in the fight were placed in solitary confinement.[2] 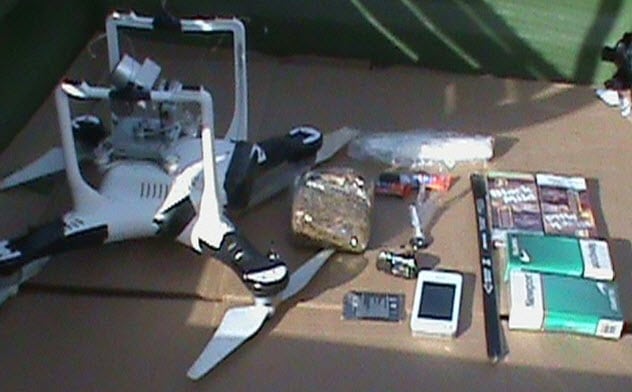 Another group of criminals took note of the Ohio prison incident just mentioned and tried it for themselves. This time, they upped the ante by including a cell phone, hacksaw blades, drugs, and super glue.

They tied everything to the drone with a fishing line so that the contraband could simply be swiped from the drone. Unfortunately, the drone clipped the razor wire of the prison walls and crash-landed, leaving the savage inmates to fight over the forbidden materials until correctional officers were able to step in.[3]

The crashed drone was taken as evidence by the Oklahoma Department of Corrections. Its director, Robert Patton, applauded the quick action and diligence of the staff working at the Oklahoma State Penitentiary in McAlester, where the event took place.

It is unclear if anyone was ever successfully prosecuted for this incident. Charges were dropped against Marquis Gilkey in 2016, although they may be refiled later. Gilkey had been charged with attempting to bring contraband into a penal institution and related offenses. 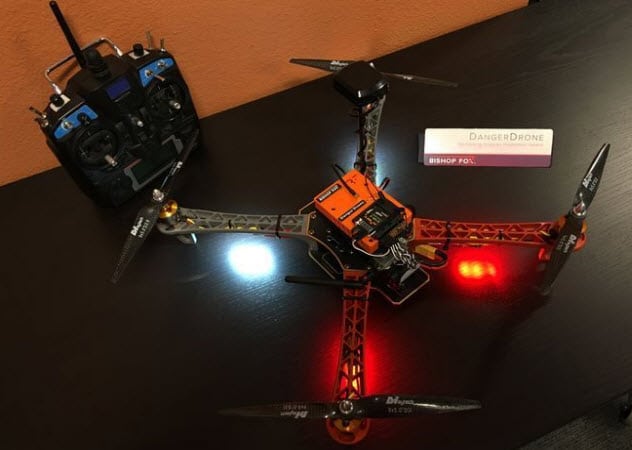 To catch a hacker, you have to think like one. Fran Brown and David Latimer, who work for security consulting firm Bishop Fox, developed a drone that can gain unauthorized access into various kinds of Wi-Fi networks. Dubbed the “Danger Drone,” it’s basically a Raspberry Pi computer loaded with hacking software and strapped to a kit-built drone body.[4]

The device has a 1.6-kilometer (1 mi) range using normal radio control, but it can be configured to receive its signals using cell towers. As an example, this drone can “rickroll” vulnerable Chromecast devices. It’s the equivalent of secretly changing the TV channel to mess around with someone watching.

Although the idea of a hacking drone is nothing new, this particular concept can change things significantly as it can make hackers more discreet and less at risk of getting caught. 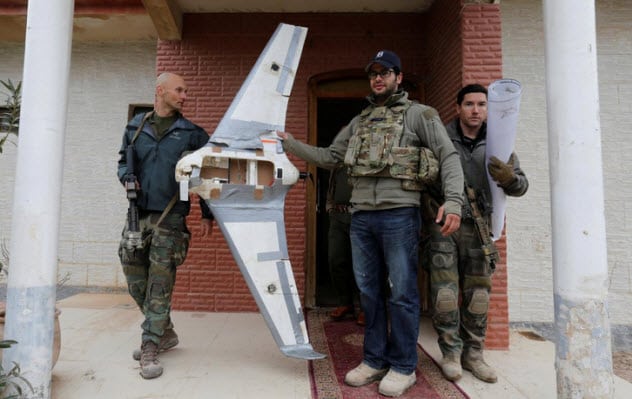 The Islamic State militant group (ISIS) managed to get their hands on hundreds of inexpensive, portable drones. These devices were used to slay and terrorize dozens of their enemies on the battlefields of Iraq and Syria. When ISIS’s Mosul bastion was defeated in 2017, Iraqi forces found scores of drone factories.

ISIS manufactured two kinds of drones. One dropped a small explosive, and the other detonated itself once it came close to its target, which completely destroyed the drone as well as damaging or destroying the target.

Some drones that dropped explosives were also kitted out with a camera, taking footage of the chaos caused below. It wasn’t long before other militant groups started using drones as well. For example, Ahrar al-Sham and Jund al-Aqsa have already adopted this tactical approach but on a comparatively limited scale.[5] 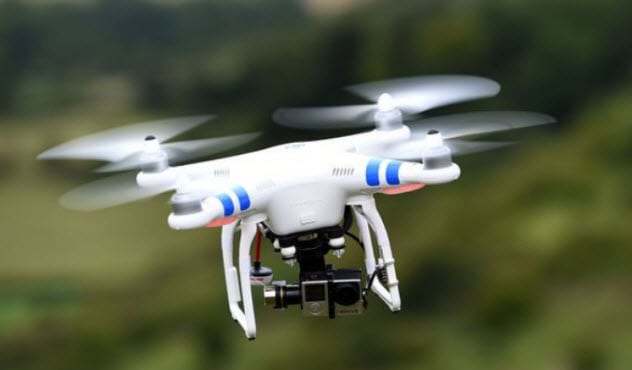 In June 2018, a drone was spotted hovering over a Cambridgeshire village for four consecutive days. A few days later, a home was raided. This led to suspicions that the drone was used to stake out potential homes to rob.[6]

The thieves knew exactly the best point of entry as they managed to break through a bathroom window and ransack the house. The police were unable to link the drone sightings with the burglary.

There’s been a surge in incidents like this, with police called out to investigate because of safety or security concerns. This excludes all the times they were called about drones being a nuisance and violent fights occurring between annoyed neighbors and drone enthusiasts. 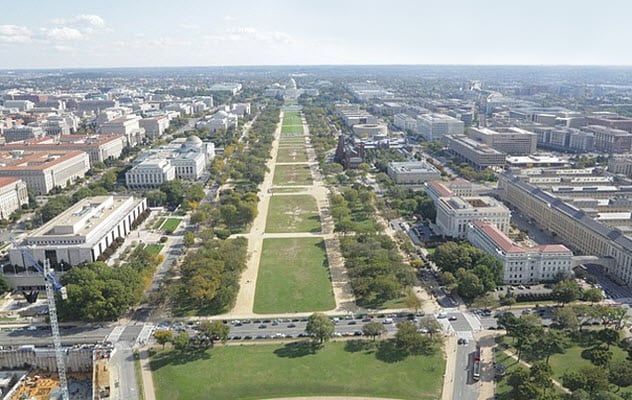 In mid-2018, records revealed that airport pilots had reported almost 250 unregistered drones illegally flying around restricted airspace at airports the prior year. This poses a serious danger for large planes as drones can get sucked into the engine or crash through the cockpit windows, potentially injuring or killing pilots in the process.

Pilot Jeff Munford was enjoying his leisurely ride across the sky in his Cessna when a drone nearly hit him and his passengers. Traveling at those speeds, the drone would have easily caused severe injuries or even death.

According to a local police department, offenders flying their drones in restricted airspace cannot be prosecuted in any way unless they commit a local or state crime. This is because nobody is sure who regulates a restricted airspace and who exactly needs to take legal action.[7]

When the question was posed to the FAA, they simply said that they don’t impose criminal penalties. According to them, that was a question that local law enforcement could answer. It’s just an endless blame game. Meanwhile, drone enthusiasts keep doing what they love while potentially endangering the lives of the people around them. 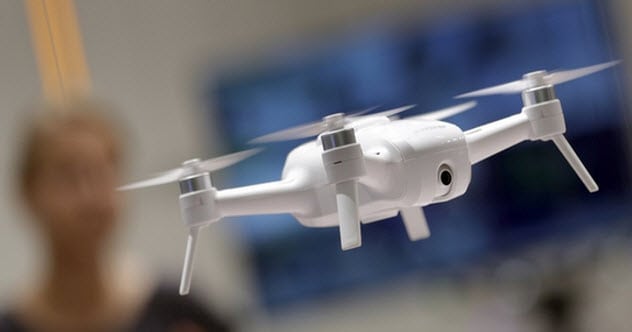 In 2017, an oddly impressive criminal tactic hit FBI agents trying to complete a hostage raid outside an unidentified US city. While the entire rescue team was set up in an elevated observation post to assess the unfolding situation beneath them, a whole swarm of drones approached and circled their position, essentially rendering the agents blind.

Not only did the criminals anticipate the FBI’s arrival, the cameras that were affixed to the drones were continuously streaming video of the agents via YouTube. Organized criminals have used drones to watch law enforcement and identify potential cooperating witnesses who visit police departments.

In Australia, drones are even used to aid illegal smuggling operations. The criminals stuff their shipment of drugs or other prohibited goods inside a shipping container. When a drone shows that port authority workers are getting too close to the container, the criminals call in a false alarm to divert security forces.[8]

Peeping Tom Used A Drone To Spy On Woman In The Bathroom: Cops

In Utah, a couple got the fright of their lives in early 2017 when they noticed a drone hovering outside their bathroom window. John Henson was getting ready for work. When he got out of the shower, he noticed the whirring sounds of the drone outside the bathroom window.

When he opened the window to investigate, the drone flew off. He chased it until the drone landed in a church parking lot. Henson grabbed the device and called the police.

Officers found that the red lights on the drone had been taped shut so that it could fly unseen in the dark. They examined the footage on the camera, which was extremely disturbing. By peeping through windows, the drone had recorded the view inside several different houses, including one high-rise apartment’s bedroom.

Police were able to track down the owners of the drone because one of them had filmed himself in front of his truck with his license plates in clear view. Posting a message on Facebook for the criminals, the officers said that they had found the drone and knew who the perpetrators were.

The police added that the suspects could turn themselves in or the officers would come knocking on their door with a warrant for their arrests. Aaron Foote and Terisha Norviel turned themselves in shortly after, and each was charged with voyeurism.[9]

1 Photo Of Sunbather Ends Up On Billboard 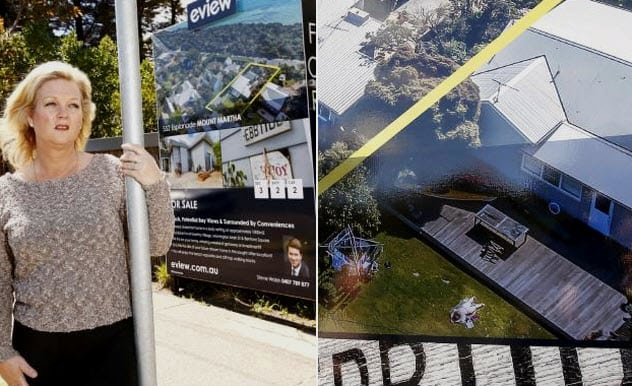 In 2014, 50-year-old Mandy Lingard from Australia was utterly mortified to find her photo plastered onto a billboard without her consent. Normally, a situation like this would only result in a small lawsuit. However, she was photographed while sunbathing in nothing but a G-string, which caused embarrassment for her whole family.[10]

The photo was taken by a real estate agent’s drone. The agent uploaded the picture to the Internet, printed it in a real estate magazine, and slapped it onto a massive billboard. The billboard image was quickly taken down, but Lingard still felt violated.

Australia’s laws about filming people on their property are currently not as strict as they should be. Another woman from Darwin was filmed skinny-dipping in her pool in 2017.

For more crazy stories about drones, check out 10 Crazy Things Drones Are Being Used For Right Now and 10 Misconceptions About Military Drones.