The history of sport is as old as humankind; we enjoy getting out into the great outdoors, kicking a ball, swinging a bat or racquet, or engaging in some physical activity and competition. The first Olympic Games were held in ancient Greece in 776 BC. Crowds cheered as athletes wrestled, threw, jumped, and ran their way to victory.

Since that time, when we think of international sports, we still tend to think of the Olympics. We also enjoy watching cricket, football, and baseball on an international level. However, there are also some lesser-known, bizarre sports which actually hold international championships each year, attracting competitors and spectators from across the globe.

Some of these sports are so insane that you’ll wonder how they ever became popular. 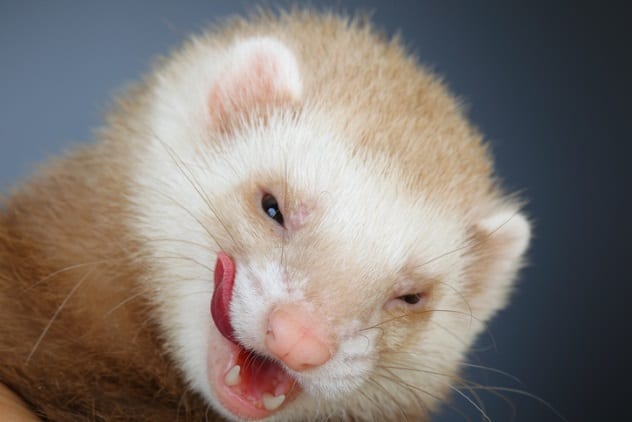 Ferret legging is believed to have originated with miners in Yorkshire, Northern England. It is an endurance stunt where ferrets are trapped in the pants of participants. The winner is the contestant who is able to keep the ferrets in his pants the longest. It may seem relatively simple, but there are a few strange rules, and the event has been known to last several hours.

The competition is open to male participants only. Contestants tie their trousers firmly at the ankles, preventing the ferrets from slithering out. One ferret is placed down each leg of their pants, and the belt is fastened tightly at the top. Rules of the competition include that the ferrets must have teeth and must not be sedated and that the participants must not wear underwear.

Contestants can stop a ferret from biting only from the outside of the trousers. The winner is the ferret legger who has endured the insanity the longest. The current ferret-legging world record is five hours and 30 minutes.[1]

The sport of wife carrying originated in Finland and has developed into an international competition. Competitors carry their wife or female teammate through an obstacle course, with the winner being the couple who completes the course without fouls in the shortest time.

The track is 253.5 meters (831 ft) long, with two dry obstacles and a water obstacle to navigate. Wives must weigh at least 49 kilograms (108 lb) or carry weights to bring them up to the legal weight. “Wives” need not be contestants’ legal spouses; competitors may “borrow” a wife from a friend or neighbor.

While there is no restriction on the carrying method, the “Estonian carry,” where the wife dangles upside down with her legs on the husband’s shoulders and her arms around his waist, is the most popular.

Wife carrying competitions are now held in a number of countries, and international championships have been held in Sonkajarvi, Finland, since 1995.[2] (The competition was only open to Finns from 1992 to 1994.) The current world record stands at 55.5 seconds.

The sport of cheese rolling originated in Gloucestershire, UK. The unusual game dates back to the 1800s in the form of a local festival to celebrate the coming of spring each May. Originally a local novelty event, the annual Cooper’s Hill Cheese Roll now attracts participants from all over the world.

Participants gather on a steep hill to chase a roughly 3.6-kilogram (8 lb) wheel of cheese down to the bottom. The first person to cross the finish line wins the cheese. The cheese is given a one-second head start before competitors begin the chase. However, the heavy cheese can reach speeds of up to 110 kilometers per hour (68 mph), sometimes resulting in injuries to participants.[3]

Indeed, injuries are reported each year, sustained from either being hit by the fast-rolling cheese wheel or stumbling on the sprint down the steep hill. Seems like a lot of effort if you prefer cheddar or brie over Gloucestershire cheese.

Bog snorkeling competitors attempt to snorkel through two lengths of a muddy, water-filled peat bog using only flipper power to propel them through the morass.[4] Snorkelers travel from around the world to the Welsh town of Llanwrtyd Wells each August to compete in the world championships. Competitors must complete two laps of a 55-meter course, using only their flippered legs.

More serious athletes can opt for the Bog Triathlon, which includes one lap of the bog, a 19-kilometer (12 mi) mountain bike ride, and a 13-kilometer (8 mi) run. The current bog snorkeling world record stands at one minute and 18.82 seconds. You’d be happy as a pig in mud if you beat this.

to the time-honored pub sport of arm wrestling, toe wrestlers lock toes and attempt to pin each others’ feet down. The competition began in a pub in Derbyshire, UK, in 1976.[5] Despite organizers’ application to have the sport included in the Olympic Games being rejected in 1997, the world championships continue to be held in Derbyshire each year.

Competitors lock toes in the ring, attempting to wrestle their opponent’s foot to one side. Both hands must be kept flat on the ground, with the noncompeting foot held in the air. Winners are decided by the a best-out-of-three round. The odd broken toe and sprained ankle is not uncommon in this bizarre sport.

For most of us, ironing is seen as a chore rather than a pleasant pastime or sport. However, the Extreme Ironing World Championships have been held since 2002.[6] Competitors from around the globe compete in a number of categories to set up their ironing boards in the most bizarre locations.

The location is limited only by competitors’ imaginations. From abseiling or scuba diving to water-skiing and even horse riding, extreme ironing enthusiasts are never hard-pressed for a new bizarre ironing spot. Competitors are judged not only on the location in which they undertook the chore but the quality of their ironing workmanship—no creases or burn marks allowed.

Horse jumping and dog agility trials are nothing new, but Kaninhop, or “rabbit show jumping,” is bounding into an international championship sport.

Highly trained rabbits first navigated their way around a Kaninhop course in Sweden during the 1980s.[7] The sport has gained international interest, with dressage events now popping up in the US, Japan, and even Australia.

Rabbits are judged by their time to complete the course as well as the height of their bounce. The current jumping world records stand at 100 centimeters (39 in) for height and 3 meters (10 ft) for length. A number of training clubs have been established around the world, where Kaninhop enthusiasts meet to train their long-eared friends.

Belting our friends and siblings with an empty Christmas paper tube was once a fun holiday activity. However, cardboard tube dueling has become a recognized “sport” which even has an international organization which coordinates events worldwide.[8]

The Cardboard Tube Fighting League (CTFL) now has branches in the US, Australia, Belgium, and the UK, where regular events are held. The aim is to regain some childhood fun with organized cardboard duels and battles.

During a tournament, competitors progress through a series of bouts and must use the same tube for the first and second rounds. A damaged or broken tube means instant disqualification in the initial rounds. The last person with an unbroken tube is declared the winner.

Only regulation tubes, 91 centimeters (36 in) long and 3.8 centimeters (1.5 in) in diameter, are allowed. Competitors can participate either in a one-on-one duel or a team event in an all-out cardboard battle. Fancy dress—made from cardboard, of course—is optional during some events.

Turkish sport of camel wrestling dates back several thousand years, providing Turk tribes similar entertainment to European horse racing and cockfighting. Similarly, wagers are made as owners parade their elaborately cloaked animals prior to the bout to display the camels’ strength and prowess. The contest begins with a female camel in heat being paraded before two male camels, who then inevitably fight for the “prize.”

The full-grown bull camels are specially fed to increase their weight and increase their chances of victory as they push and butt each other around the arena. Inevitably, one camel will give in and run away, often with the victor in hot pursuit. The winner is the first camel to make his opponent scream, fall, or run away.[9]

Ostrich racing originated in Africa and is a long-established pastime in a number of African countries. The sport has been popular in Florida since the 1890s, when a theme park in Jacksonville offered ostrich rides to visitors. The International Camel & Ostrich Races have been held in Virginia City, Nevada, for some 60 years.

The large flightless birds are harnessed in a similar manner to a horse. Riders mount the birds, holding on as the ostriches bolt down the track at speeds of up to 69 kilometers per hour (43 mph). The birds are said to be significantly more difficult to handle than a horse, with many “spills” expected on the racetrack.[10]

They can also be raced using a buggy and harness, trotting the jockey precariously around the track.

Lesley Connor is a retired Australian newspaper editor who provides stories to online publications and her travel blog.