On a planet where the pyramids, the Hanging Gardens of Babylon, and the Mausoleum at Halicarnassus are among the unchallenged greatest wonders of the world, it is often difficult to believe that such bizarre things as rainbow trees, polka-dotted lakes, and waterfalls of “blood” could even be possible.

But venture into the most beautiful, surreal corners of the world and you’ll find a variety of scientific marvels that form delightful and horrifying scenes straight out of a psychedelic novel. 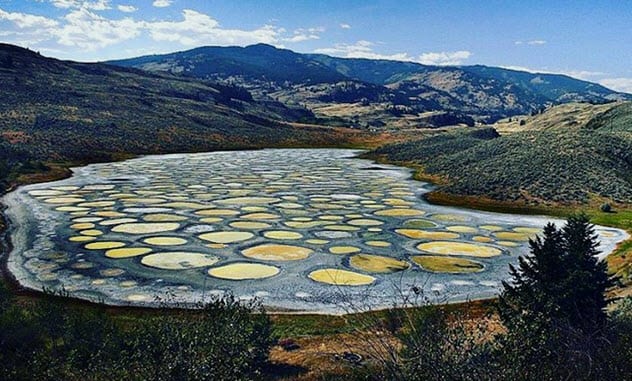 Although most lakes are formed and maintained by an ever-present source of water, some are instead an accumulation of melted snow, excessive rain, and trace amounts of groundwater. Bodies of water with this easy-come, easy-go nature (here known as an “endorheic” lake) are susceptible to extreme evaporation.

In fact, the lake itself will completely dry up during the summer. For one lake in Canada, this results in a colorful mosaic of spots. Officially named “Spotted Lake,” this remote location within the Okanagan Valley in British Columbia looks like just about any other lake in the country during the winter, spring, and fall months.

However, when summer rolls around, most of the lake’s volume is lost to evaporation. What is left behind isn’t any old patch of land, though. Spotted Lake is rich in natural resources: Calcium, sodium and magnesium sulphates, and titanium are the chief contenders there, and they are responsible for the colorful hue left behind.

When the water surrounding these elements and minerals evaporates, what remains are multicolored alkaline rings that, depending on the concentration of each, will leave varying hues of green, yellow, and blue rings on the dried-out ground.[1] 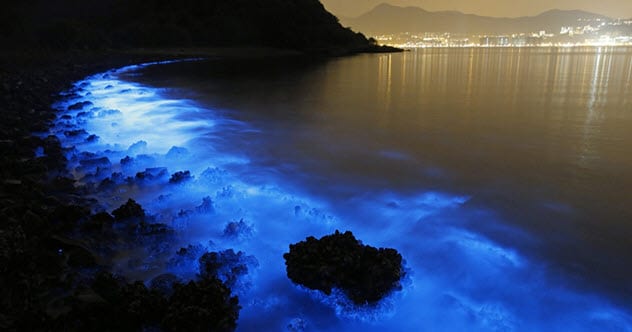 From a tourist standpoint, Thailand is known for its beautiful beaches, exquisite cuisine, and backpacking trails that have the popular islands crammed with sightseers. The country is often advertised as a “deserted paradise.”

The vast numbers of tourists who inhabit the place from November to March are most likely unaware of one of the most extraordinary aspects: the blue, bioluminescent water seen only by night. Looking like something out of a fantasy novel, the waters off coastal Thailand are largely inhabited by microscopic plankton which contain many of the same chemical combinations as fireflies.

Using the same luciferin-luciferase chemical reaction as fireflies, the plankton found in these coastal waters glow when irritated. The display was once described as “a magical light show [to rival] the brightness of the stars above.”[2]


8 A Waterfall Of Blood 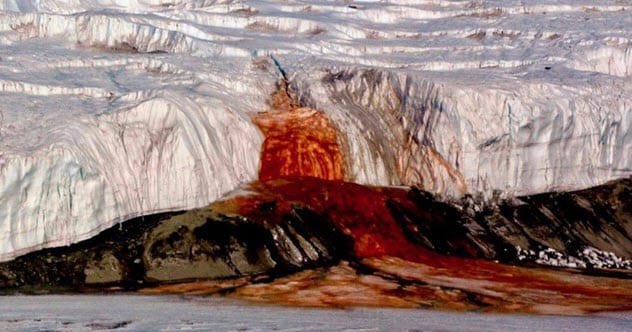 When we think of waterfalls, most of us are probably more inclined to think of the commonly known Niagara Falls, the most prominent (and probably overlooked) aspect of which is its crystal clear water. Yet for all the commonness of clear falls, there is a location where the water that pours forth is eerily crimson in color.

First located in 1911, this area of the remote Taylor Glacier in Antarctica appears to be spouting blood instead of water. The reason for this is rather complex. As opposed to being fueled by melting snow and groundwater, the water source of the Taylor Glacier is the saltwater lake that lies beneath.[3]

Over time, this salt water has picked up trace amounts of iron from constant contact with the bedrock below. What follows is the same chemical reaction that produces rust. The water takes on the deep red hue of iron oxide. When spilling over, the water seems to be made of blood. 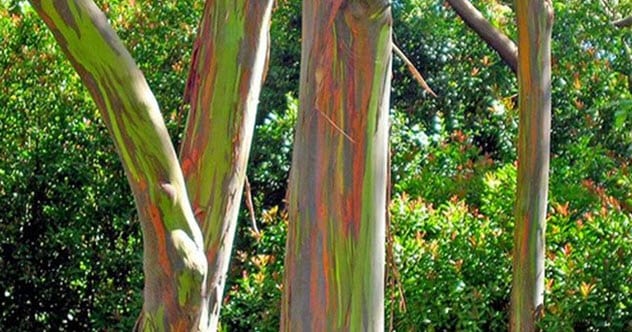 Looking more like a regular tree splattered with paint, the appropriately named rainbow eucalyptus is most prominently located in the Philippines and Indonesia. It can even be found stateside in Hawaii, California, and Florida.

Wherever you come across this tree, though, its wild coloration is the result of both its unique bark formation and its location. (The most colorful of these trees are found in Indonesia and the Philippines.)

The bark of the tree is formed by dividing cambium cells, each with a high concentration of chlorophyll (the chemical which gives leaves and grass their rich green color). Over the life span of the cambium cells, they become infused with varying levels of tannins, the chemicals which run the visual gamut from red to brown.

The varying combination of these chemicals, along with the relative humidity and the wetness of the bark, creates the rainbow effect.[4] 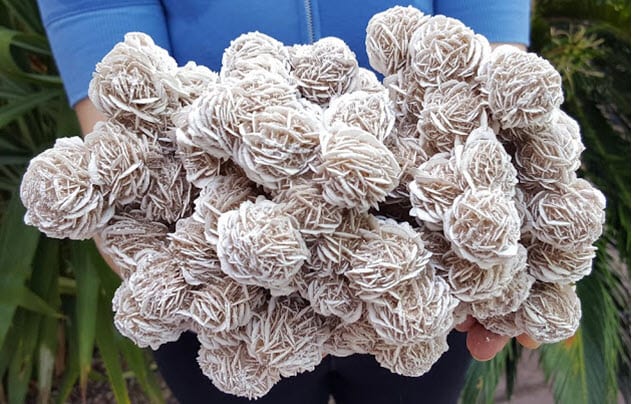 Neither a stone nor a rose, a phenomenon found in Mexico and Tunisia (and, less commonly, in Arizona) is known as a “stone rose.” Formed from either gypsum or barite, these roses are produced as a result of evaporation when one or the other of these minerals binds with grains of sand in an arid, salt-rich environment.[5]

With an average size of 10 centimeters (4 in) per petal, these roselike formations range in color that is directly related to how they were formed. The ones made in shallower locations typically produce amber petals, whereas deeper formations in a wider space often produce yellow or clear petals.

The unique shape of these roses is not the only unusual thing about them. Regardless of their color during the day or where they developed, all will glow the same opaque white color when placed under an ultraviolet light. 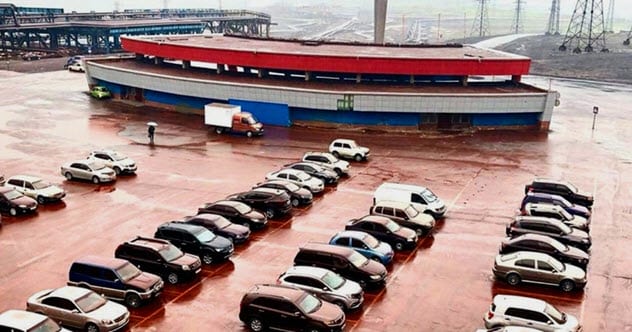 Travel to certain locations within India—namely, Kerala—and you may be treated to the seemingly morbid phenomenon of blood rain. While the name calls to mind some kind of biblical horror film, this state’s spookiest weather affliction is not the result of oxidation within the water. Rather, it is due to the state’s proximity to nearby deserts.

Although rain evaporates cleanly, it can pick up a multitude of things on the way back down. (Acid rain is a prime example and result of this.) But chemicals are not the only thing that can be mixed in with the precipitation.

Airborne particles that are thin enough and high enough can also blend with the moisture in the clouds. When reddish particles of sand get mixed with those clouds, they will fall and pool into puddles of bloodred liquid, even leaving a red hue behind when the rain itself evaporates.[6]

This scientific explanation of particles being mixed with cloud moisture also held true for the same phenomenon experienced in Russia in July 2018. The city of Norilsk was besieged by red rain one afternoon.

A metal processing plant was performing some routine maintenance. Rust shavings which had been scraped from the floor were caught in an updraft which took them high enough to meld with the clouds. Not long afterward, the red rain was pouring.


4 A Lake of Frozen Bubbles 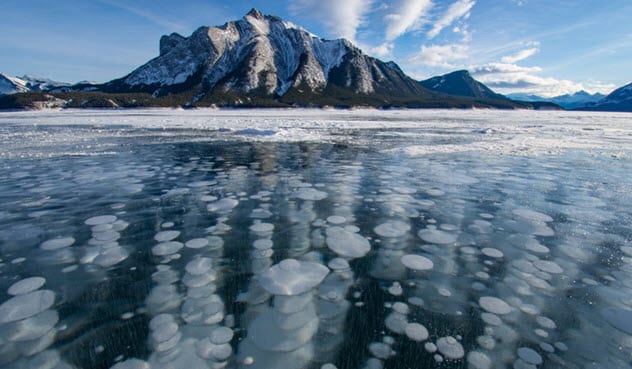 Looking as though it’s full of frozen jellyfish or cartoonish jewels deep beneath its surface, Lake Abraham is an artificial lake located in Alberta, Canada, that dates back to 1972. It is burgeoning with frozen bubbles.

One unique aspect of this lake is that it has high concentrations of methane gas trapped within its surface. Most lakes contain base amounts of methane as a result of decaying matter which sinks to the bottom and is feasted on by bacteria. In turn, that bacteria produces the methane which escapes through the water and eventually goes airborne.

However, Lake Abraham is unique because its water temperature is high enough that methane can still escape into the water but cold enough that escaping gas will freeze into opaque bubbles. They display a hue ranging from white to deep blue depending on their proximity to the surface.[7] 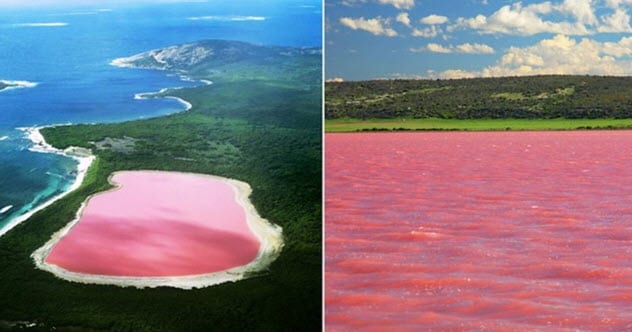 For the strawberry lovers of the world, you’re in luck . . . at least visually. There is a vibrant pink lake off the coast of Western Australia by the name of Hillier. Although it is not the only pink lake in the world, Hillier’s water is distinctive for being the only one with water that does not lose its color when collected.

This color is neither a mere optical illusion nor the result of the bedrock below the water. Rather, it is the result of several factors working together.

Discovered in 1802, Lake Hillier is home to a certain type of halophilic (“salt-loving”) algae known as the Dunaliella which generate their energy via use of all visible frequencies of light except those falling in the red-orange spectrum. In addition to “leaving behind” the red light energy, these algae produce variations of carotene that contribute to the lake’s reddish-pink hue.[8] 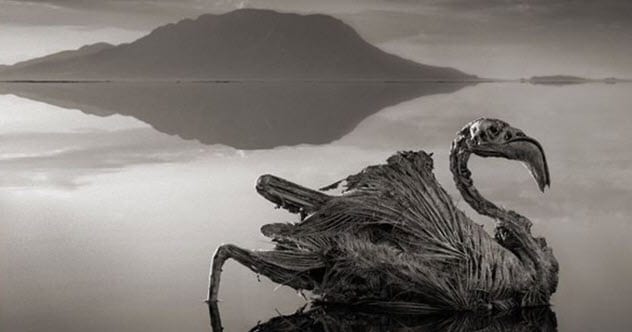 At first glance, Tanzania’s Lake Natron seems like a morbid oasis with its bloodred waters surrounded by many peaceful birds lurking at its shores. However, the cause of those deep red depths is more than a little unsettling.

Also known as “Stone Animal Lake,” this body of water in Africa was once rumored to have such a high alkaline content that it could instantly kill and petrify any animal that dared wander into its depths. Rather than being the result of an optical illusion or the presence of halophilic bacteria, Natron’s deep red color is attributed to the presence of minerals formed by volcanic processes in the immediate area.

These processes gradually increased the pH of the water until it became saturated with natron and sodium carbonate, the latter of which was once used in the practice of mummification. The presence of these various minerals—along with the decaying remnants of animals that couldn’t live in such harsh conditions—heavily increased the alkaline nature of the water.[9]

As such, it became favorable to haloarchaea, red-bodied organisms that tint the water of the lake and the plumage of the flamingos which often live by the water. 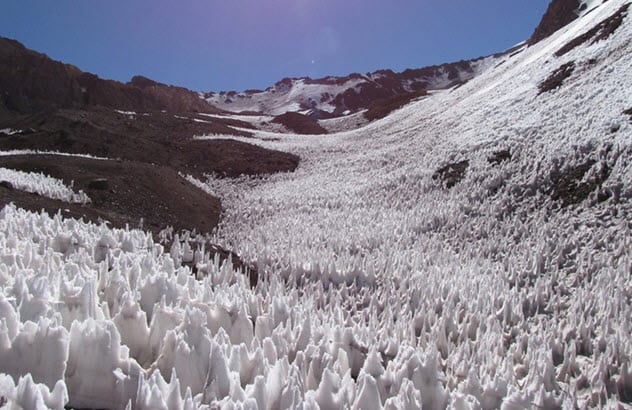 From the childhood favorite of making snowmen to the artisan craft of ice sculpting, the activity of shaping snow and ice into various pleasing formations has been around for a while and seemingly isn’t going anywhere. However, what happens when the Earth itself decides to get in on the fun?

Travel to various regions within Chile, and you will find miniature forests of icy blades . . . that have exactly no snow or ice in the surrounding area. First discovered in 1835, these religiously named “penitentes” can grow to upward of 5 meters (16 ft) tall.[10]

They are the direct result of sublimation, a chemical process by which a heat source transforms a solid into a gas without first melting it. In a process that only builds on itself, the angular formation of smaller spikes further concentrates the sunlight. This increases the rate of sublimation until entire forests of these spikes will overtake the landscape.

Roxanne is the author of mythological fantasy and paranormal horror novels. She is located at twitter.com/rheathwrites.