What makes a person a true expert in his field is the ability to spot subtle differences between otherwise similar things. Whether you’re a doctor trying to identify a rare condition or a special agent working in the forgeries office at the FBI, these subtle differences can often be the key to identifying something correctly.

Although most of us will never need to solve a House-like medical mystery or pretend to be a pilot to escape from Tom Hanks, we can still learn to tell the difference between confusing things. We’ve previously looked at 10 animals that are commonly confused, so here are 10 more to add to your knowledge. 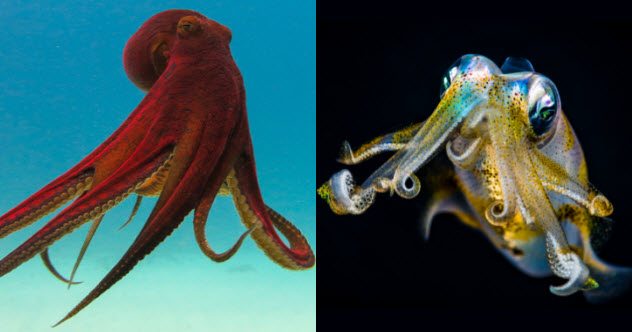 To the untrained eye, an octopus and a squid are almost indistinguishable. But fortunately, there are a few easy ways to spot signs that will help you identify what you’re looking at. Let’s start off with what will likely be the biggest shock: An octopus has no tentacles.

Tentacles have hooks or suckers at their tips only. If it is lined with suckers, it is known as an arm. Octopuses and squid both have eight arms. But squid also have two tentacles, which will be longer and higher up than the arms.

If you can’t sit there and count the number of arms, don’t worry. There’s a much more obvious way to tell if you are looking at an octopus or a squid. While an octopus will have a round, bulbous head, a squid will have a triangular head with a fin on each side. Unlike octopuses, squid may live in schools. They also tend to be larger and live longer.[1]

Most of you probably only encounter apes and monkeys in the zoo, where a handy little placard will tell you exactly what you’re looking at. Although you can’t be expected to identify the species of ape or monkey, you should be able to easily identify the animal as an ape or a monkey.

There are hundreds of species of monkey but only about two dozen species of ape. So, one way to tell the difference would be to learn those ape species. Judging by size is also a relatively reliable way to spot the difference as apes are much larger than monkeys.[2]

But the most effective way to differentiate between an ape and a monkey is to look for a tail. Old World monkeys from Africa and Asia will generally have short tails, while New World monkeys from South and Central America will have long tails. Apes, however, have no tails at all. As a result, monkeys generally spend most of their time in the trees while apes spend most of their time on the ground. 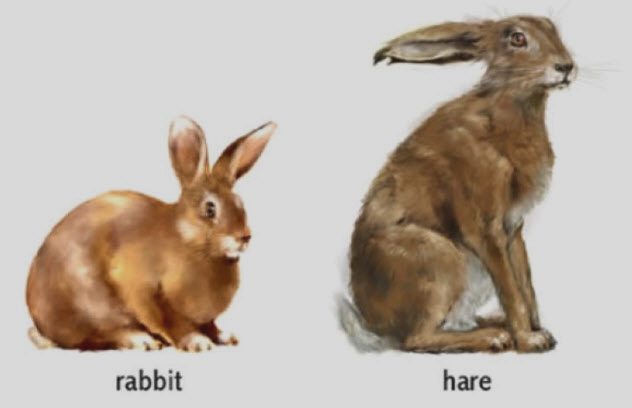 As these animals are usually seen as tiny brown blurs speeding across open plains, picking up on the subtle differences between hares and rabbits can be a bit of a challenge. If you do manage to get close, however, you’ll find identifying them a lot easier. Hares are typically bigger, faster, and stronger than rabbits, and this is most apparent by their large ears and feet.

Where the animal lives can also be a telltale sign. Hares are not domesticated animals, so if it’s a pet, it’s a rabbit (or at least it should be). In the wild, rabbits fight each other and live underground because their babies are born defenseless. Hares rarely fight and live aboveground as their young can be independent soon after birth.[3]

Finally, you could identify the animal based on its fur and the time of year. In the hotter months, hares have mostly brown fur with some black. This is often replaced by white fur for the winter. On the other hand, wild rabbits are brown in summer and gray in winter. 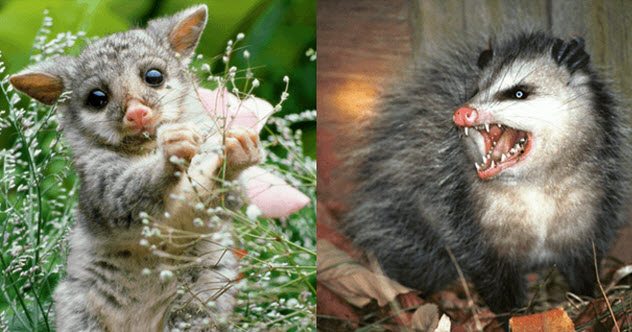 As a wise man once said, “Since when did they change it to opossum? When I was comin’ up, it was just possum. Opossum makes it sound like he’s Irish or something.” Well, the opossum isn’t Irish but American. Although Americans tend to call the animal a possum, real possums are actually from Australia, New Zealand, China, and a few other places.

So what’s the difference?

Both animals are marsupials, with the opossum being the only marsupial native to North America. Opossums have gray fur, a white face, and black ears and feet. Possums can be gray, black, brown, or golden in color and have larger ears than an opossum.

But the easiest way to distinguish between the two animals is the cute factor. Possums are like chinchillas, with big bodies and small heads. On the other hand, opossums have hairless, ratlike tails and a long snout with sharp teeth, with which they will undoubtedly threaten you if you approach.[4] 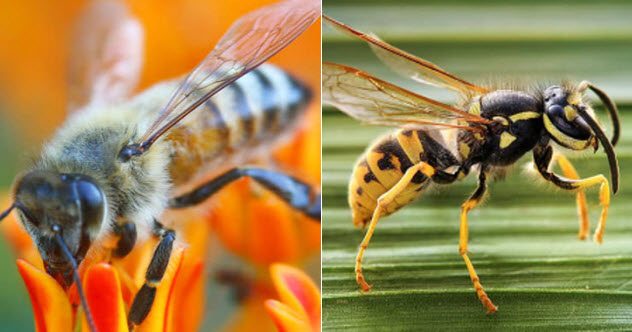 When it comes to bees and wasps, most people are more concerned with running away than correctly identifying the insect. Both are classified as Apocrita, which refers to insects with narrow waists. But bees are typically rounder than wasps, which tend to have a more cylindrical shape.

Bees also tend to be much less aggressive than wasps for two reasons. First, bees are herbivores and it is not in their nature to attack anything unless it is for survival. But more importantly, most bees have a rounded stinger. If used, it will get stuck and rip out, causing fatal bodily harm to the bee.

On the other hand, wasps are predators that hunt insects and have a smooth stinger that can be safely withdrawn. Although they are still unlikely to attack unprovoked, they are generally the more dangerous of the two. Finally, as bees are pollinators, they tend to be covered in hair, including on their legs. Since wasps don’t pollinate, they have smooth, hairless bodies and legs.[5] 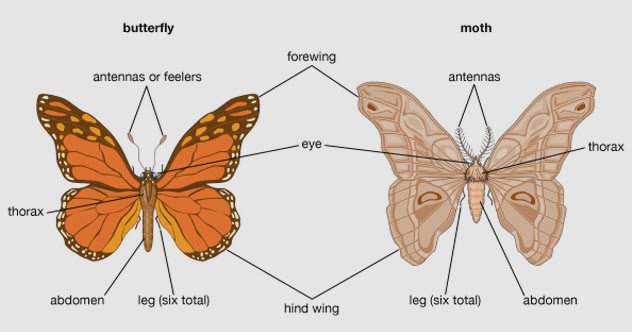 Butterflies and moths bear a lot of striking similarities to one another, especially when you consider their life cycles. Moths start off as larvae before fashioning themselves cocoons covered in silk. They emerge as moths sometime in the following three weeks.

Surprisingly, butterflies start off as caterpillars but do not make cocoons. They make chrysalises, which are harder and smoother than cocoons and have no silk. They also emerge within three weeks.

Did you know? Shrimp or Prawn?

If you’re looking at a shrimp or a prawn, odds are you’re about to eat it. If that’s the case, then you probably already know which one you’re eating based on the menu. But if you put a prawn next to a shrimp, telling the difference becomes a lot more difficult.

Both animals are classed as Decapoda crustaceans, which means that they have 10 legs and an exoskeleton. Prawns are usually noticeably larger than shrimp, and their bodies are considerably less curved. From head to tail, each of their body segments will overlap with the next, like roof tiles. 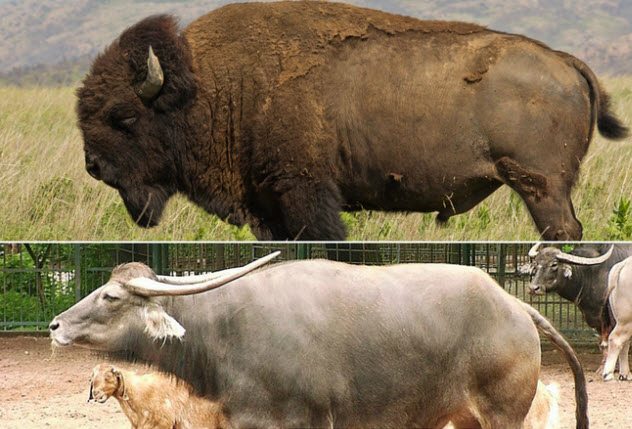 Although a lot of people struggle to tell the difference between a bison and a buffalo, it really isn’t too difficult. First, their geographical location is a dead giveaway. Early American settlers named the bison a buffalo due to the bison’s similarity to the African buffalo. But buffalo are confined to Africa and Asia, whereas bison are found in Europe and North America.

In physical terms, distinguishing the two is as easy as distinguishing a cow from a bull. Unlike buffalo, bison have enormous heads and shoulders that look disproportionate to their bodies. On the flip side, buffalo have huge, mustache-like horns while bison have smaller horns that don’t extend out too far.

Due to the climate they live in, bison have much more hair, including a beard, that they shed in summer. Buffalo have much shorter hair that you would expect for an animal in Africa and Asia.[8] 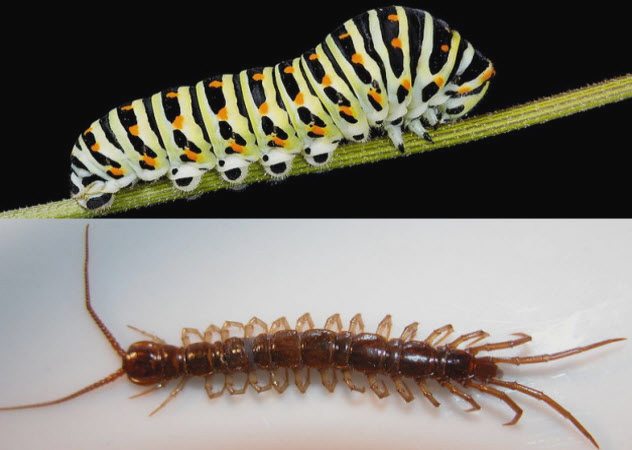 When they’re crawling around in the dirt, caterpillars, centipedes, and millipedes are hard to tell apart. But if you look a little closer, the differences among them quickly become quite apparent.

Although their patterns can make them look segmented, caterpillars have long, continuous bodies like worms. Many caterpillars are also covered in light hair, while centipedes and millipedes are not. This should be enough to tell you if it’s a caterpillar, but the most accurate way to identify the animal is to look at its legs.

Caterpillars have prolegs and true legs. The prolegs will disappear when a caterpillar becomes a butterfly, while the true legs will remain. The true legs are the three pairs closest to the head that are bunched tightly together and have hooks at the ends.[9] 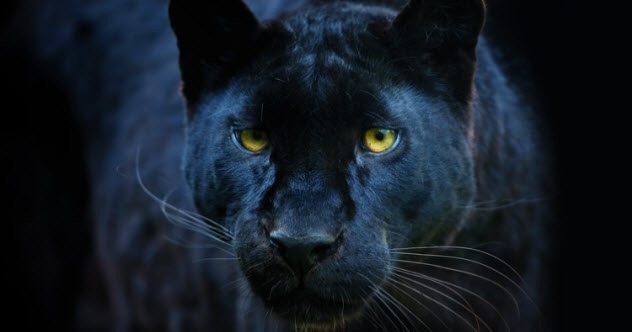 Most big cats are confined to a specific corner of the world. Cougars and jaguars are confined to the Americas, most lions are in Africa, and cheetahs and leopards can be found in Africa and Asia. But black panthers are unusual in that they can show up anywhere that there is a species of big cat. That’s because there is no such thing as a black panther.

What most of us call a black panther is actually just another kind of big cat. The animal’s actual identity will depend on where you are, but why it looks like a black panther remains the same. You’re probably familiar with albinism. It causes people (and animals) to appear pale due to a lack of melanin, which colors our hair and skin.

Melanism is the exact opposite: Too much melanin causes the animal to turn black. In big cats, this covers up their distinctive spots or stripes, making it appear as though they are all-black cats. But if you examine the fur closely, you can still see the patterns that the animal would naturally have.[10]

You can find the ramblings of a commonly confused Simon over on Twitter.

Read more confusing but fun facts about animals on 10 Animals That Don’t Look Dangerous But Are Actually Deadly and 10 Animals Happily Living In Unexpected Places.