There is more to luminescence than fireflies and glow-in-the-dark toys. Fluorescence, which is mostly absorbed light being released, is responsible for some of the most awe-inspiring natural spectacles and scientific discoveries.

In recent years, glowing has shown up in strange places, in unexpected species, and in surprising ways that are invisible to the human eye. Even more intriguing, fluorescence is woven into several unsolved mysteries, can be seen from space, and might even be deadly to humans. 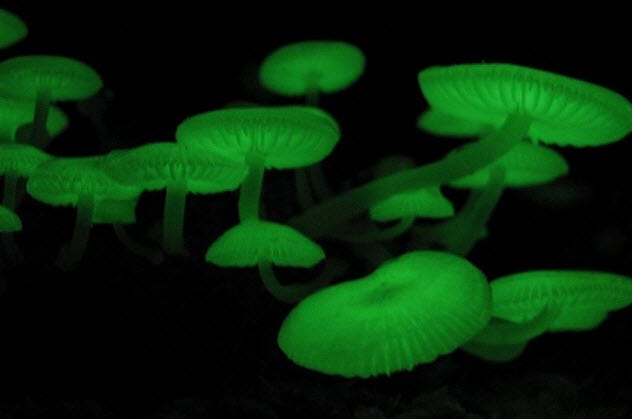 It may be hard to believe that glowing mushrooms exist, but fluorescent fungi pop up all over Brazil and Vietnam. For years, the secret behind their glow could not be explained.

To get to the bottom of this mystery, scientists collected a few in 2015. In the laboratory, the compound responsible for the bioluminescence was isolated. Called oxyluciferin, the chemical also exists in fireflies and glowing sea creatures.

For the mushrooms, the glowing compound is used to attract insects. Once the bugs land, they pick up spores and scatter them elsewhere. This helps the mushrooms to spread.[1]

Another question involved how the fungi produced luciferins. A closer look revealed that the mushrooms manufactured their own special luciferin and paired it with oxygen and an enzyme which resulted in fluorescent colors.

The nature of the enzyme suggested that it could interact with other kinds of luciferins and trigger more shades that glow. This suggests that there is still a lot more to learn about these surreal-looking mushrooms. 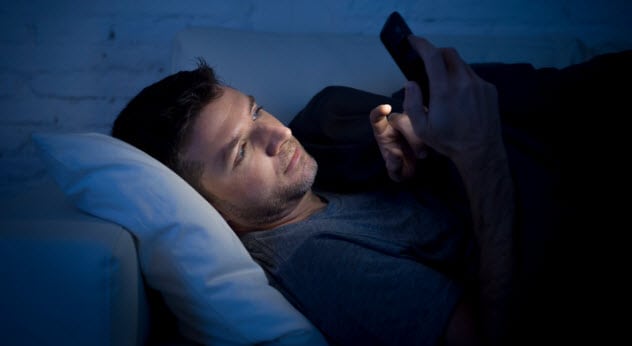 During the day, blue light emanating from electronics and energy-saving bulbs appears to have few drawbacks. On the other hand, researchers have discovered a frightening link between blue glow at night and deteriorating human health.

Some of its daytime perks include more energy and alertness. When people relax with electronic devices in the evening, blue light radiates from screens and stimulates the brain. This disrupts proper sleep.

It may sound like nothing. But studies have shown that people can become prediabetic when the sleep rhythm shifts. Links have also been made to obesity, heart disease, and cancer.[2]

To be fair, scientists do not have solid proof that blue light directly causes these conditions. But it does lower melatonin levels. The lack of this hormone, which regulates the sleep cycle called the circadian rhythm, may be the link associating blue light with cancer, although the research is at an early stage.

If it can be proven that blue wavelengths are deadly to humans, one environmental success needs to be overhauled. Fluorescent light bulbs and LED lights may be more energy efficient, but they produce more blue light than any other. 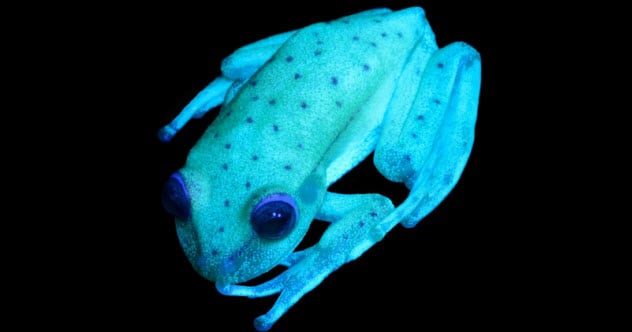 In 2017, Argentinian researchers took a plain-looking frog home. The polka-dot tree frog is mostly green with red spots and, thus far, nothing to take the champagne out of the fridge for. Things changed when the amphibian was being prepared for tests, some of which called for its tissues to be studied under UV light.

To everybody’s surprise, the instant that UV shined on the creature, the whole frog lit up. The blue-green fluorescence not only makes it the first glowing frog but also the first fluorescent amphibian in the world.

This is quite an achievement because any glowing in land animals is incredibly rare. The frog’s radiance comes from compounds named hyloins. The benefits that hyloins offer this species are hazy, but they could have something to do with polka-dot frogs needing to see each other at night. The blue-green glow is visible to the frogs and also makes them brighter during twilight and the full Moon.[3] 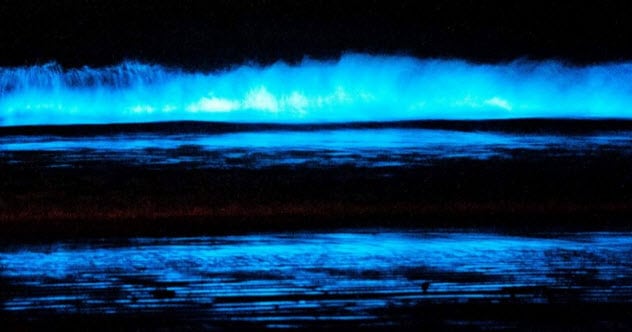 Sometimes, strange plants cause coastlines to light up with eerie streaks of light during the night. Most recently, in 2018, ghostly blue lines appeared in a spectacular display off Southern California when miles of coastline lit up.

The algae responsible are called dinoflagellates, and they are plants capable of swimming. During the day, their dense numbers cloud the water red. Such an unusual bloom in their population is popularly known as a “red tide.”

In the past, some red tides attracted the wrong kind of attention because they can make seafood toxic for human consumption. However, at night, dinoflagellates cause an otherworldly beauty that now brings tourists to the beach at night.

At the chemical level, each plant has a protein and an enzyme. Any disturbance, like a wave or passing creature, mixes the two and causes the algae to become bioluminescent.[4]

This reaction is not entirely understood, but it is likely a defensive measure. It could exist to flash zooplankton, the dinoflagellates’ main predator, into submission or glow to attract fish that prey on the plankton. 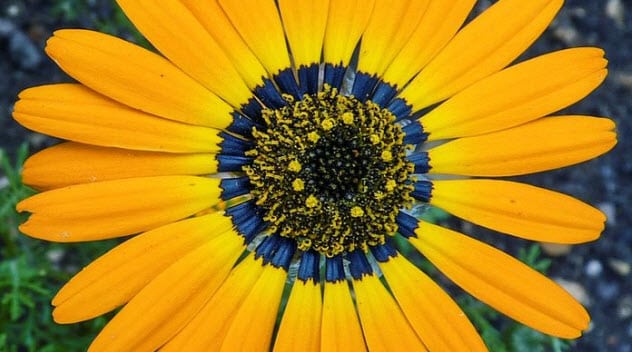 Flower genes struggle to make petals that are blue, which is exactly the color that flowering plants want more than anything. The reason? Bees are attracted to blue, and flowers need the buzzing insects to complete their fertilization cycle.

In 2017, scientists discovered how plants engineered a novel way to lure bees. Those that could not produce blue flowers evolved petals with nanostructures capable of glowing blue in sunlight.

These halos are like neon signs to bees. The tiny reflective scales turned out to be a widespread tactic and were found in all major groups of flowering species that depend on insect pollination, including some trees.

Although the general hue was blue, some plants also produced an ultraviolet scattering effect. It enhances bees’ ability to locate blue. The halos turned out to be a stronger attraction than the real thing. During trials, bumblebees ignored the actual colors of flowers and went straight for those with a blue fluorescence.[5] 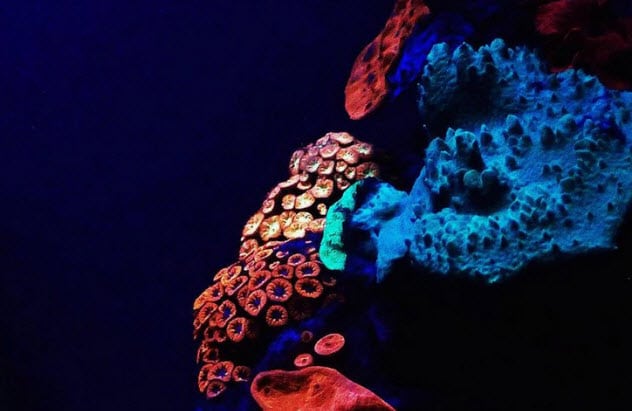 Researchers figured out a long time ago why shallow-water corals glow. Their green light acts like a sunscreen against solar radiation. But scientists could not understand why sun-sheltered corals from the deep sea also emit fluorescent light.

In 2017, the answer dawned. Deep corals don’t glow to avoid light but to get more. At such depths, life-giving light is not abundant. To survive, the corals must absorb as much as possible. However, the blue light at the bottom of the sea is not sufficient to give corals the energy they need.

Impressively, the corals use red fluorescence to blend the blue into orange-red light. The latter allows better food production through photosynthesis.[6]

This discovery may be exciting for scientists but not for environmentalists. Global warming causes mass bleaching of shallow corals, and a major hope was that some species might migrate to deeper waters. As shallow corals glow green, they may not adapt to deeper waters where survival requires a red fluorescence. 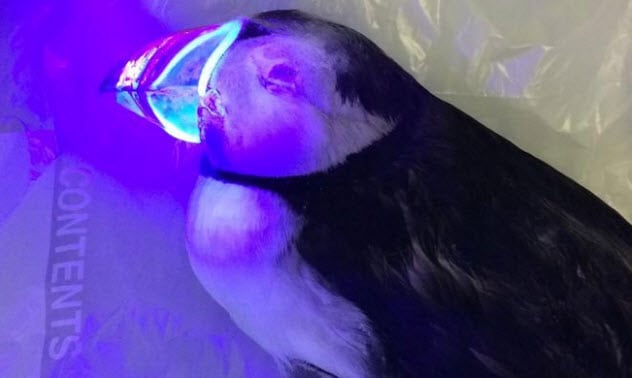 In 2018, biologists had a dead Atlantic puffin on their hands. As an afterthought, they decided to view it under UV light. The idea was to test for any glow because crested auklets, a species related to puffins, have fluorescent beaks.

Under normal light, puffins’ beaks are very recognizable. They are decorated with colors likely meant to woo the opposite gender. Even though puffins have a glowing cousin, it was still unexpected when the cere and the lamella, two ridges on the dead specimen’s beak, fluoresced under the UV lamp.

Scientists are not sure why puffins light up, but it might have something to do with their ability to see the UV spectrum. Even during the daytime, puffins notice each other’s glowing ridges. More mysteries include what it looks like to them and how they are capable of fluorescence in the first place.[7]

As only one dead bird was tested, scientists still need to rule out the possibility that the glow was somehow caused by decomposition. 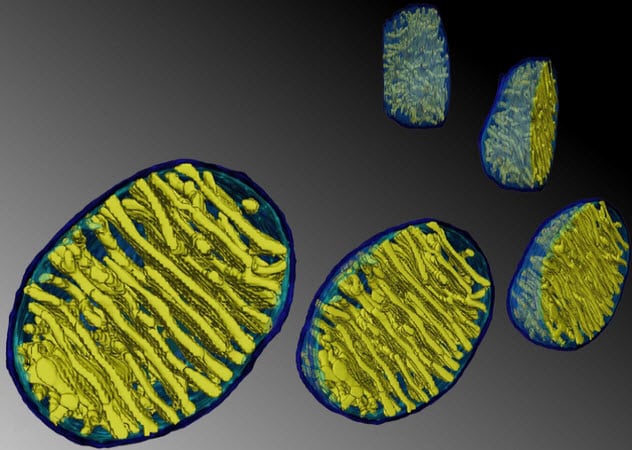 In recent years, scientists have created temperature-sensitive dyes called “fluorescent thermometers.” These dyes cling to specific targets inside cells, which made them perfect for an experiment designed to determine the heat of mitochondria. These tiny structures inside cells convert oxygen and nutrients into energy. This process also generates heat.

In 2017, scientists used a yellow fluorescent dye that dims when heat intensifies. Once injected into cells, it can help to calculate temperature. Previously, it was assumed that mitochondria operated at normal body temperature, which averages 37 degrees Celsius (98.6 °F). The tests showed that mitochondria operate at a scorching 50 degrees Celsius (122 °F).

If a person ever developed this kind of full-body temperature, it would be a life-threatening fever. Thankfully, the record for the hottest body temperature does not come close to the mitochondria’s fire. If this strange heat can be better understood, a lot of old notions about cell function—especially those related to temperature—could fall away.[8] 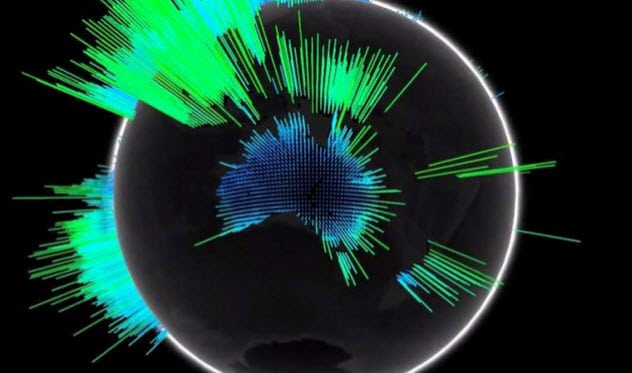 In 2017, Australian researchers and NASA developed a novel way to monitor climate change. They took breathtaking images from space showing plant fluorescence. The new technique could detect solar-induced chlorophyll fluorescence, which is produced during photosynthesis in leaves.

To make sugars from photosynthesis, plants absorb carbon dioxide. Understanding this cycle on a global scale is crucial for staying on top of the planet’s climate and carbon cycle dynamics.

To start testing the idea, researchers used satellite monitoring to snap pictures of glowing chlorophyll. The levels were measured and compared for accuracy against ground observations about photosynthesis. The results showed that the space snaps delivered accurate information across different vegetation, regions, and time.

The innovative technology is not just about following new plant growth and climate change. The fluorescent photos may also help us to better understand Earth’s ecosystem and carbon flows as well as land management and biodiversity conservation.[9]

1 First Photo Of A Memory 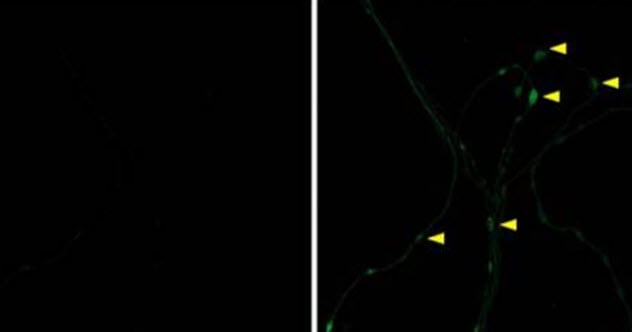 During recent investigations into how memories are made, researchers chose to poke around the brain cells of a slug. The neurons of the ocean-crawling Aplysia californica make a good match for those of humans.

For a long time, neuroscientists suspected that proteins form at brain synapses when long-term memories are created. Until the sea slug offered its brain, this theory was never proven.

During the recent experiment, scientists first gave the cells the feel-good hormone serotonin which aids in memory formation. Then, a fluorescent protein was used, originally green but able to turn red under UV light.

The test was as simple as it was successful. Under ultraviolet light, researchers watched proteins turn red and marked their positions. The neurons were then encouraged to form memories. Incredibly, while that happened, new green proteins grew between the brain cells. This allowed the first image to be taken of a memory being formed.[10]

Besides proving the theory, it showed that short-term memories did not form new proteins. The exact role that the protein’s presence (or lack thereof) plays in the difference between short-term and long-term memories remains a mystery.

Read about more bizarre plants and animals on 10 Incredible Plants That Belong In ‘Avatar’ and 10 Technological Advances That Animals Had First.