They might walk alike, they might talk alike, and they probably even look alike. Twins are an endlessly fascinating genetic miracle. Whether they are fraternal, identical, conjoined, polar body, mirror, or separated at birth, the similarities and complexities of twins are something that both scientists and the average man have marveled over for generations.

Whether you’re a twin looking for more information on your own genetic situation or you’re simply a curious onlooker, here are 10 intriguing facts about all sorts of twins.

10 Identical Twins Are . . . Not So Identical After All 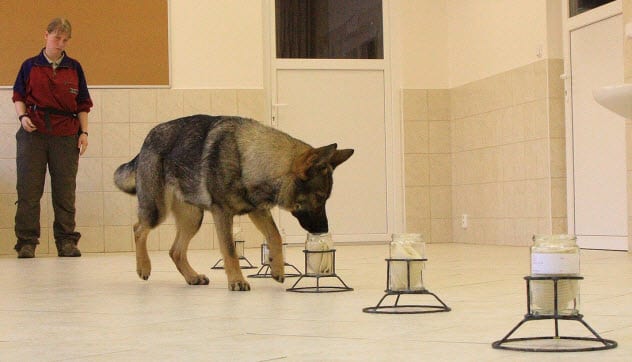 It is common knowledge that identical twins have the same DNA. However, that does not necessarily mean that they are biologically similar in every other sense. From birth, identical twins have different fingerprints and different belly buttons. But as they age, their bodies change independently of each other.

One example of this is the natural scent produced by each twin. A study done in the Czech Republic used 12 German shepherd police dogs of the highest caliber to see if dogs could tell the difference between identical twins.[1]

The scientists took scent samples from two sets of identical twins and two sets of same-sex fraternal twins. Then the researchers put the samples from an individual twin pair in a lineup of seven possibilities. Each time, the dog successfully matched the original scent to the corresponding twin.

As a result, scientists have concluded that the innate odor of identical twins is not the same. This may be a result of environmental factors, such as an infection, that could alter an individual’s odor. 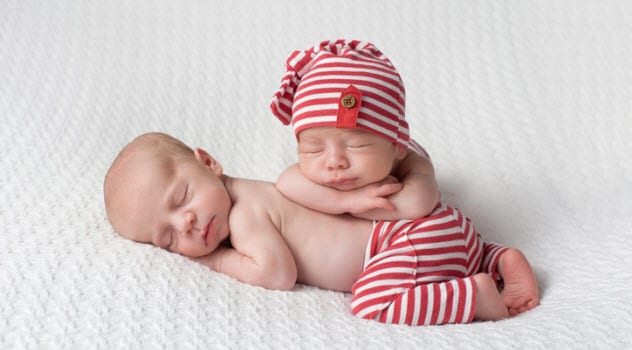 Identical twins are the result of a fertilized egg splitting in half. However, in rare cases, an egg can split before fertilization. If separate sperm fertilize the eggs, the resulting babies are known as semi-identical twins. 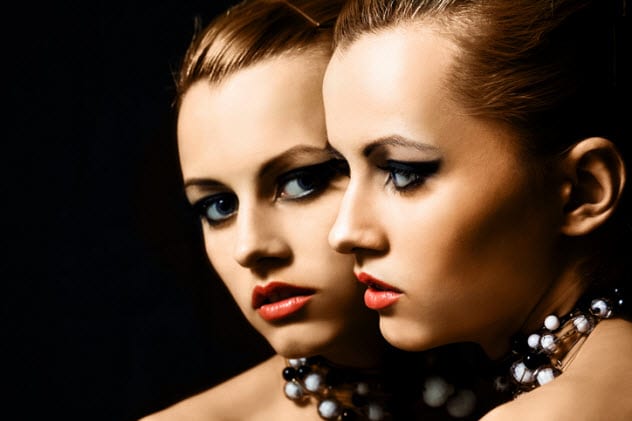 About one-fourth of all identical twins develop as mirror images of each other. The split is later than usual—about 1–2 weeks after fertilization—and they form facing one another. As a result, they end up being the exact opposites of each other.

One may be right-handed while the other is left-handed, their hair whorls will twirl in opposite directions, and they may have matching birthmarks on the opposite sides of their bodies. In some rare and extreme cases, the organs and skeletal structures of mirror twins may reflect one another.

Typically, after same-sex twins are born, their DNA is tested to tell if they are identical or fraternal. This also allows doctors to test how genetically similar the twins are. However, scientists have noticed that the DNA is the same in mirror-image twins. Thus, the only way to tell them apart so early on is to take note of their reflecting features.[3] 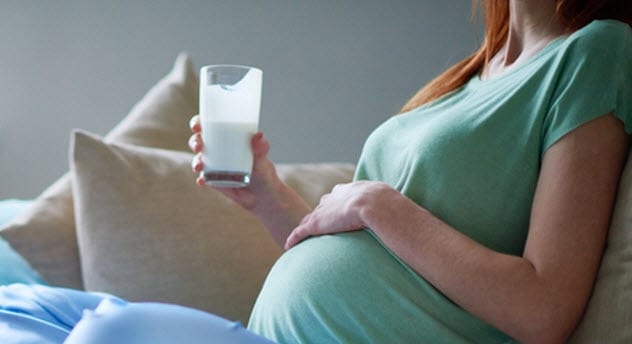 Twins are becoming much more common in the 21st century. Between 1980 and 2003, the birth rate for twins went up by 75 percent. While the increased use of fertility drugs was initially thought to be the cause of such a steep rise, a preliminary study done in 2006 by Dr. Gary Steinman of the Long Island Jewish Medical Center showed that women who drank cow’s milk were five times more likely to give birth to twins than their vegan counterparts.

Why focus on the consumption of dairy?[4]

Steinman suggests that women who drink cow’s milk have higher levels of the growth hormone IGF because farmers use this hormone to stimulate milk production in their own cows. As a result, Steinman suggests that the increased IGF promotes the release of two eggs at the same time—thus, the higher chance of bearing fraternal twins. 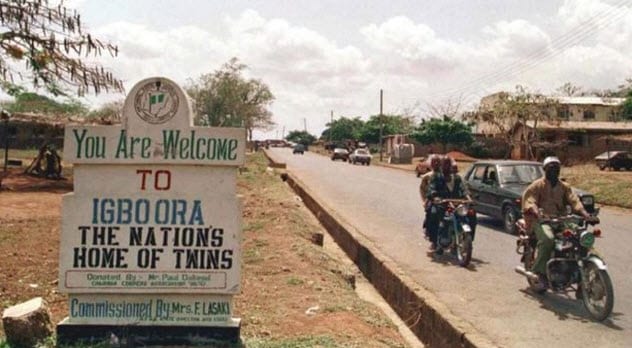 While twin births are becoming more prevalent, identical twin birth rates have remained constant across the globe at about 4 per every 1,000 births. So, the large variance of twin birth rates among regions is a result of the increase of fraternal births.

This is important because fraternal twins can run in families. Some women are genetically predisposed to hyper ovulation. As a result, some regions are well-known for their high twin birth rates.

This may occur because these nations make up a large portion of the homeland of the Yoruba people who have long been known for their high twin birth rates. Although scientists are still determining the exact cause of this phenomenon, it is largely believed that both diet and genetics play a part.

5 The Long Lives of Twins’ Mothers 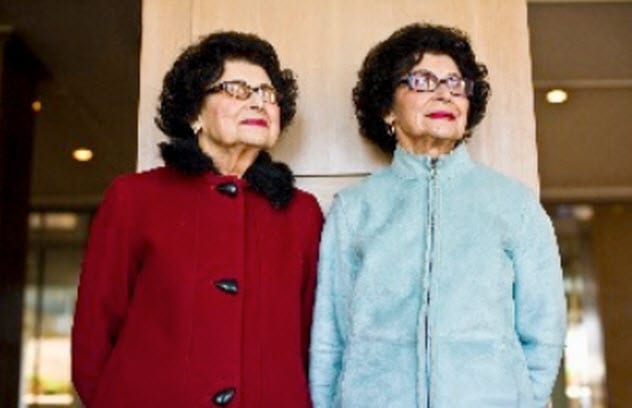 Before contraception and infertility treatments, women who had twins naturally tended to have more children closer together in age. Researchers at the University of Utah determined this and other correlations in a 2011 study about twins.

Although having twins does not directly increase the length of a woman’s life, it can certainly serve as a marker for strong genes. Additionally, it is believed that twins are evolution’s way of passing on the mother’s genes twice as fast.[6]

4 Born To Be Socialites 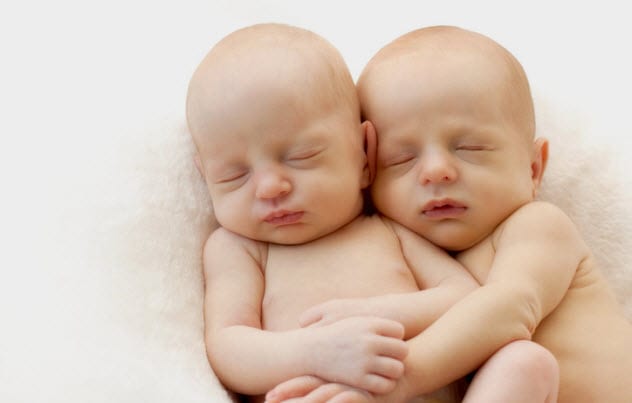 According to a study published in the scientific journal PLOS One, twins begin to intentionally interact with one another at around 14 weeks in the womb. The twins lean into one another for comfort, effectively putting their heads against the other and being extra gentle around sensitive areas like the eyes.

Not only do these interactions serve to comfort one another but they also help the twins develop their own form of nonverbal communication. This time spent in such close contact also builds a solid foundation for that quintessential connection that all twins seem to share.[7] 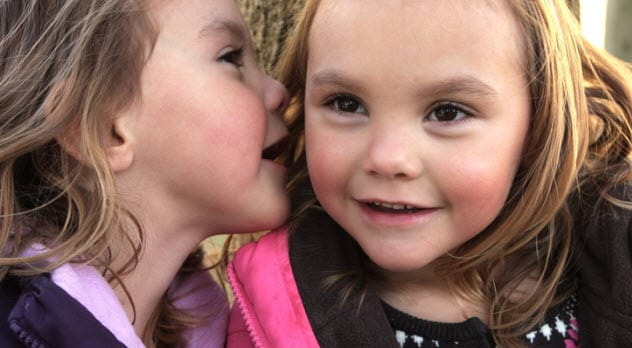 However, this means that young twins often mispronounce the sounds that they hear. As a result, only the twins can intuitively attribute meaning to their words, which makes it seem like they’re developing a “secret language” between them. 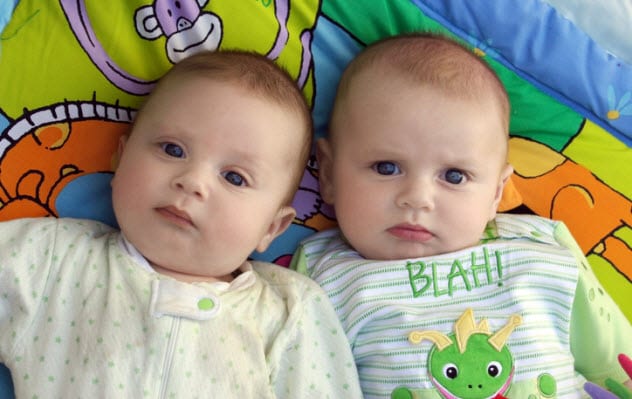 A 1950 to 1954 study of twins born in Birmingham, United Kingdom, found that twins were more likely to have a speaking deficit in early to mid-childhood than their singleton peers. According to a follow-up study in Aberdeen, Scotland, the IQs of twins average 7.4 points lower than those of singletons at age seven and 5.5 points lower at age nine.

This study, which included many siblings of the twins, took into account how many older siblings each participant had, the age and health of the mother at time of birth, and birth height and weight.

In conclusion, it was found that young twins struggled with cognitive proficiency in comparison to their singleton counterparts due to a lesser gestation period and a lower birth weight. However, as the twins aged, their cognitive skills quickly caught up to those of their peers.[9] 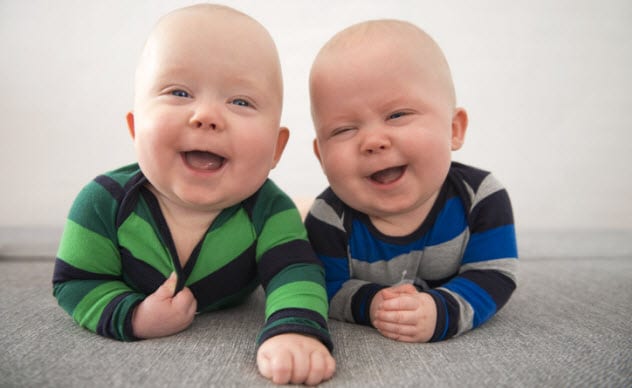 If a scientist were to examine the DNA of each child, the researcher would not be able to determine to which couple the child belonged because both couples have the exact same DNA. The children are cousins because the parents are siblings. However, as the parents are identical twin siblings, the children’s genetics are from the exact same genetic pool. So, their genetics are similar in the same way that siblings have similar genetics.

Even so, this does not mean that the children will all look exactly alike. Rather, they will have the same chance of looking like each other that regular siblings—or even fraternal twins—will have.[10]