At times, evolution takes a wrong turn. When it does, all we can do is stare in fascination at what it produces for us. Sometimes, it gives us something wonderful like the octopus. Other times, we get something terrible like the bobbit worm.

But every now and then, we get an animal that’s just so poorly thought out that it makes us wonder if evolution itself might have been drunk during the design phase. These animals have no right to exist in the state they do. Yet they continue on, not knowing that their bodies, brains, or both are ridiculous. 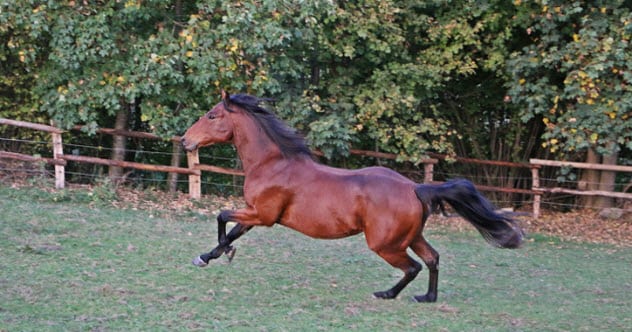 When we think about horse attributes, one of the first things that comes to mind is speed. Horses are built for it, bred for it, and even used as a measurement of how fast and powerful a car is. We as a species chose, bonded with, and selectively bred these animals to be fast and strong. So you would think that they would be physically well suited to running, jumping, and pulling.

Unfortunately for the horse, they got the short straw when it comes to their physicality. Horses can reach speeds of up to 80–89 kilometers per hour (50–55 mph), roughly twice the top speed of a human being. But it comes at a cost: A horse that runs at that speed for more than a few minutes experiences bleeding in its lungs and throat.[1]

Their bodies are built for speed and power, and yet they are incredibly fragile. When horses exercise too hard or for too long, they develop an “exercise intolerance” that causes their very breath to hurt them. The pressure on their lungs from gasping for air while running breaks blood vessels and causes them to cough up blood.

Once it starts, the only fix for this problem is to stop them from running. 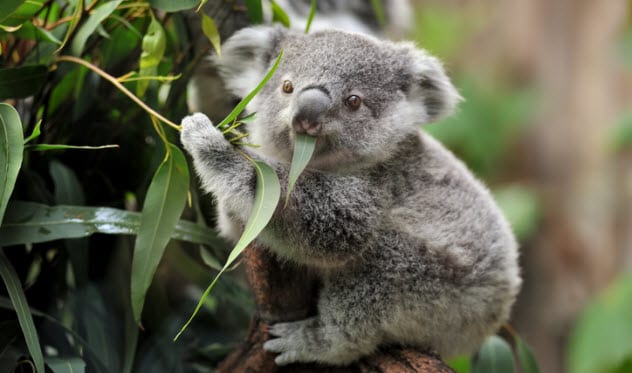 Herbivores are a special class of animal. To eat nothing but vegetation that wears down the teeth, they have to have special adaptations. Some—like rats, hamsters, and other such rodents—have teeth that just grow forever. Others, like the horse, have incredibly tall teeth that take years to wear down.

On the other hand, koalas . . . have nothing. In addition to having small, smooth brains (which rob them of the ability to accomplish complex tasks) and being incredibly picky eaters who only consume poison (the toxic and extremely low-nutrient leaves of the eucalyptus plant), koalas have a single, rooted set of small, jagged teeth.

Over time, the tough, fibrous leaves of the eucalyptus plants wear down those teeth—all the way to the gumline. Unable to eat the leaves and unwilling to consume anything else, the koala starves to death.[2] 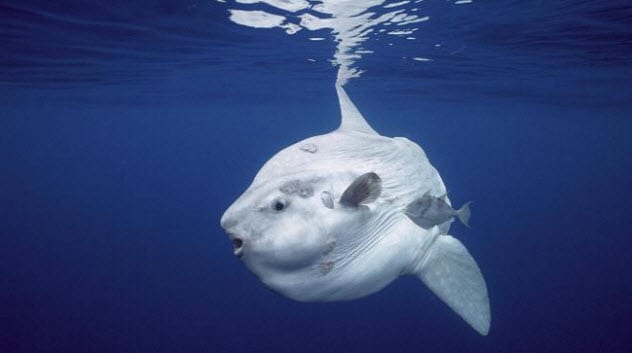 The ocean sunfish (aka mola) is one of those rare animals that serves no purpose on this Earth. They are strange-looking with their large eyes and lips and their inability to close their mouths due to their strange teeth.

In addition, they are exceptionally vulnerable to parasites and predators. Not that they have many, of course. The 4.3-meter (14 ft), 2,300-kilogram (5,000 lb) fish exists on a diet of algae, plankton, and jellyfish. All these foods are low in nutrition, which makes them the fish equivalent of lettuce.

This unfortunate creature also lacks a swim bladder, an important organ that nearly all fish possess to help them float. The sunfish has to compensate for this missing organ with every inch of its body, specifically with a layer of jelly under its skin that makes it neutrally buoyant.

In fact, the only reason the sunfish continues to exist is because it lays up to 300 million eggs at a time. This would be impressive except that their strategy is to dump all 300 million into the water near a male and hope that the eggs are fertilized and survive to hatch.[3] 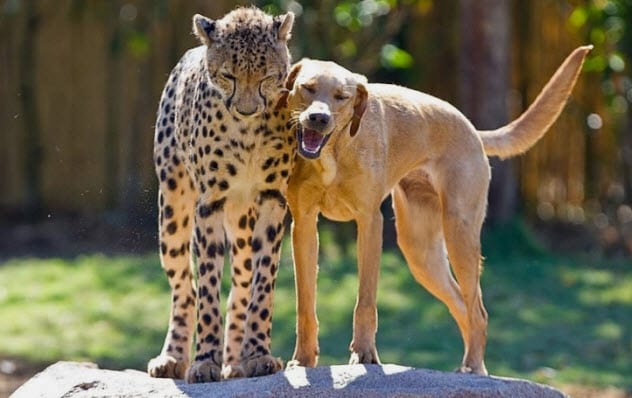 The cheetah is one of our favorite predators. We imagine them snarling and pouncing on prey as they roam the African plains. We see them as powerful, speedy hunters that are always ready to take on a challenge.

Even though we love them, we are a little afraid of cheetahs because we equate them to lions. With the cheetahs’ sharp claws, sharp teeth, and incredible speed, you’d assume that they are fearless hunters that could stare death in the eye and chirp before swallowing a village whole.

Fortunately for us, we don’t have to worry too much about them because cheetahs are known for another trait as well: severe anxiety. Especially in captivity, cheetahs are so horribly stressed out just by existing that they have trouble socializing and breeding. It’s gotten to the point that zoos around the world have started giving cheetahs their own support dogs to help them stay calm enough to breed and socialize.[4]

Luckily for the cheetahs, the dogs are happy to be their support buddies and neither seems to be a threat to the other. 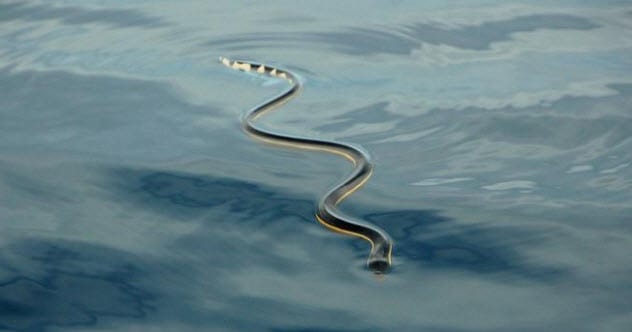 Water all around and not a drop to drink!

Sea snakes are exactly what their name suggests: snakes that live in the sea. These odd little creatures swim on top of the waves. They slither across the ocean as if it were sand, eat fish, and have babies. Given that they live in salt water, you’d think they could drink it.

Nope. In fact, sea snakes are almost always in a state of moderate dehydration. They can’t drink salt water at all and have to wait for it to rain. When it rains on the ocean, the less dense fresh water sits on top, floating over the more dense salt water of the sea.[5]

When this happens, the snakes are free to drink as much as they can. However, as rains happen infrequently out there on the waves, the poor snakes spend much of their time thirsty to the point of dehydration.

They also can’t go on land and either can’t or won’t swim into freshwater streams and rivers. 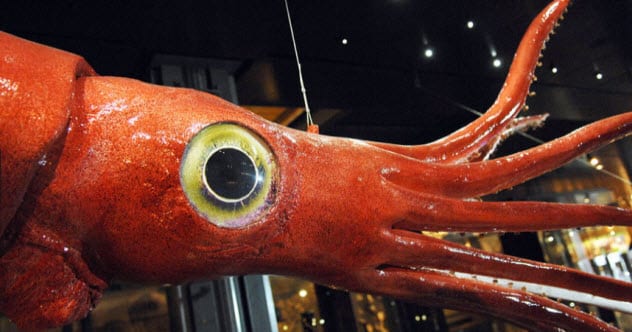 The giant squid is one of the only true sea monsters in the ocean. With eyes the size of basketballs and top speeds of up to 32 kilometers per hour (20 mph), the giant squid is massive, fast, and terrifying to encounter. It eats up to 227 kilograms (500 lb) of food a day in the form of fish, sharks, and even smaller squid.

Don’t think for a second that it’s all good for this huge cephalopod. This creature also has a fatal design flaw: Its throat runs directly through its own brain. Should this massive tentacled beast eat something too big, swallowing the prey will give the giant squid brain damage as the bulge passes through the brain and presses hard against the tissues. The big gulp will bruise and possibly mash the ring of brain pressed against the esophagus.[6]

For this animal, biting off more than you can handle can be a death sentence. 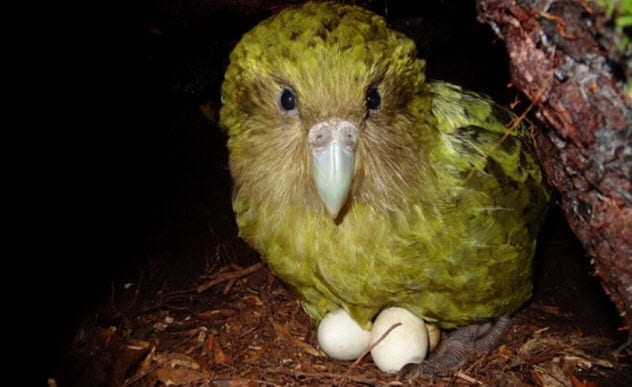 Imagine for a minute that you could only hook up with someone based on how many berries were ripe on the bushes around your house. Not only that, but there was a very low chance of anything actually coming of it even if the berries were plentiful. That’s life as a kakapo parrot, the world’s only flightless parrot and resident idiot bird of New Zealand.

Considered a sacred bird by local Maori populations, the kakapo is an absolute mystery of evolution. Flightless, nocturnal, and with massive thighs for climbing trees, these birds have no defense against predators such as weasels, cats, and feral dogs. But the real kicker is their mating habits.

Once every two or three years (and sometimes as long as five years), a certain berry (the rimu fruit) comes into bloom on the islands where these birds live. Only during a good blooming season for these fruits will the kakapo mate.

The males build large, acoustic bowls and make loud, booming “BOW” noises to attract a female. But if he isn’t loud enough or if insufficient rimu fruit is in bloom, the females will ignore him. Their infertility rates are so high that this only hurts them. As of now, there are just over 150 wild kakapo.[7] 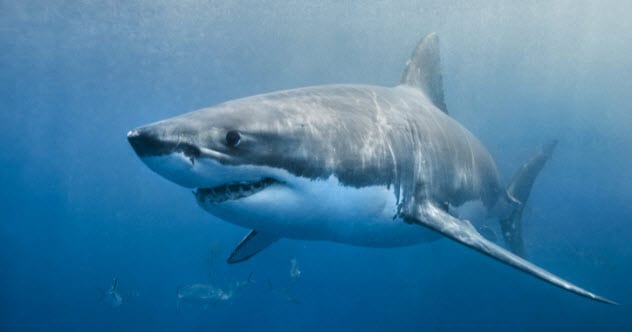 Nothing captures the imagination of ocean lovers quite like the great white shark. With its huge jaws, rows upon rows of teeth, and powerful musculature, the shark has been a staple of many horror and action films and stories through the decades. It is also a well-known fact that sharks have to keep moving to breathe.

What you may not have known, however, is that this applies even when the great white is sleeping. Thanks to being obligate ram ventilators, great white sharks have to keep water moving through and over their gills at all times.

To make up for this, they have a unique way of sleeping. They lie in a current with their mouths open, sleeping while the current pushes through their gills and breathes for them.[8] That’s like if you had to go on a ventilator every time you needed a nap. 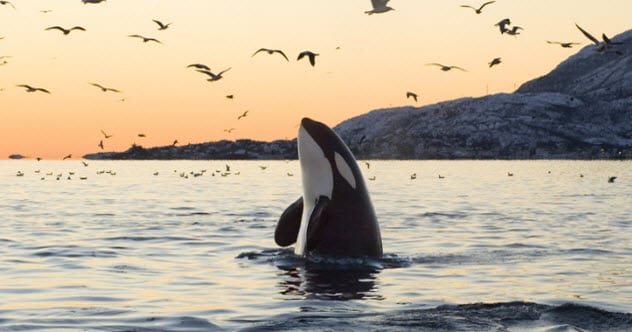 In general, it’s an accepted fact that life started in the sea. Creatures were born, evolved, crawled up on land, and became mammals. Although these critters may have liked being mammals, some of them missed the ocean. Enter: the whale.

The oldest-known ancestor of the whale is the Indohyus, a creature that looked a bit like a spotted anteater. Along the way, this animal returned to the water, evolving new and interesting aquatic traits.[9]

However, it did not shed its mammalian characteristics. The new fishlike creature, which would eventually become the whale and the dolphin, still needed to breathe air and have lungs instead of gills, both terrible traits to have when you live like a fish. 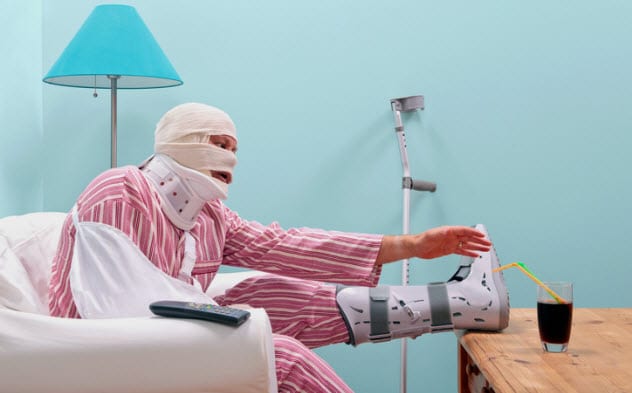 Ah, humanity. We’re pretty proud of ourselves as a species. Speaking intellectually, we’re fairly solid. Our brains aren’t perfect, but we’re intelligent. After all, we’ve managed to build computers and spacefaring vessels. Our physical form, however, is not good.

For one thing, our feet are made of 26 separate bones—a leftover from our primate days. This makes our feet incredibly fragile and unnervingly easy to damage as they were originally meant for gripping and had the help of our hands in supporting our weight.

Our ankles are also fragile and turn outward at the slightest provocation—to the point that even stepping wrong can sprain or break them. Likewise, our spines are not built for the burden they carry. A myriad of curves and strange proportions lead to back problems as early as our twenties and almost inevitably by our forties or fifties.

We also have the misfortune of giving birth to live young whose heads and torsos are larger than our birth canals are normally equipped to handle and twice as big by proportion as most other animal young. Nearly a full third of human births are now performed via C-sections.[10]

Deana lives with her girlfriend and a roommate in Small Town, USA. She one day hopes to own a big enough tank for 20 goldfish. Her favorite soup is cream of mushroom.

Read more bizarre animal facts on 10 Animals That Have Figured Out Their Own Life Hacks and 10 Strange Syndromes That Only Affect Animals.