If you have ever played an MMORPG (Massively Multiplayer Online Role-Playing Game) or similar video game online, you know that some people can get a little crazy when it comes to that one item or even location they simply must have. What you may not know is that there are people out there who will pay a lot of real-world currency for digital items and the amounts can get insane.

If you thought it was crazy that you dropped $19.95 on a game you were already playing for free on your phone, you fell victim to microtransactions, but that is not what we are talking about here. These items exist only within the game worlds they came out of, and people paid a ton of cash for them.

The purchase of this item comes with a rather sad story. A player decided it would be best to drop nearly ten grand on the purchase of a special spaceship in the game EVE Online. The game has its own currency called Interstellar Kredits, but they have a real-world cash value, so when someone dropped 309 billion ISK on the Revenant Supercarrier, they clearly were not messing around since that translated into a whopping $9,000! That is a lot of money for most people, but especially so given what happened next.

Back in 2007, the player who saved up his money to buy the biggest and baddest supercarrier in the game ended up losing it to an ambush. That’s right, the ship was destroyed and could not be recovered! It all came about due to the presence of a spy in his online group. They were led directly into a horde of supercarriers and dreadnaughts whose players were more than eager to destroy the most dangerous prize in the game.[1] 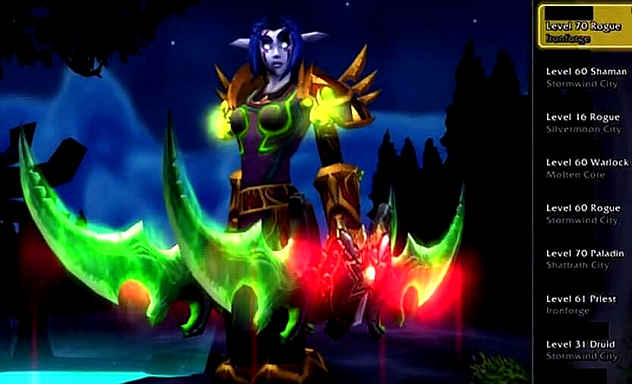 Some people buy ships or weapons, while others spend their money on characters. Zeuzo was the character name of a Level 70 Night Elf rogue character who was picked up by a player who went by the name “Shaks” back in September 2007 at a cost of $10,000.[2]

This might seem like a simple transaction . . . one player builds up their character until they get to a high enough level to make them appealing to someone with cash to burn (in this case, approximately 600 hours), but Blizzard Entertainment, the company behind the mega-hit MMORPG, saw it differently. The sale apparently went through without a hitch, but Blizzard came swooping down shortly after and banned the character from their servers just a few days later.

The lesson here is to check the user agreement—the one we all scroll to the bottom of and slap “agree”—before you throw any money towards a purchase from another player. Most companies do not let you profit off their games in this way. 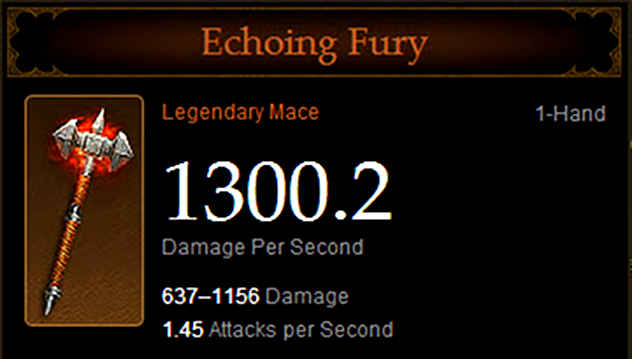 When it was first released, Diablo 3, another game by Blizzard, had a marketplace attached where players could put up items for sale and receive real-world currency in exchange. The marketplace has since been dissolved, but when it was available, players took advantage, and some made thousands of dollars each month thanks to their penchant for grinding through the game and finding rare items.

One such item, an Echoing Fury Mace with maxed-out stats, sold online for a whopping $14,000! Now that the marketplace is gone and people are still playing Diablo 3, the same weapon is worth exactly $0.00, but when it was sold, it was the most expensive item found in the game.[3] 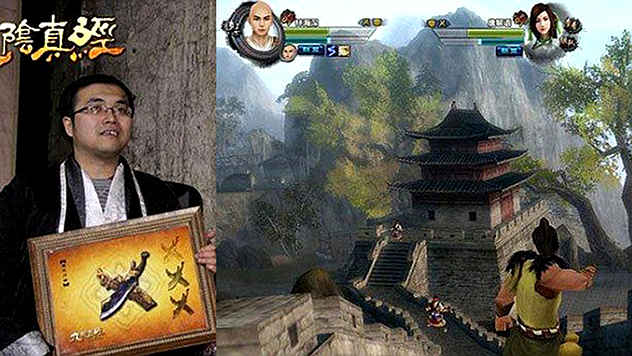 This item is a bit different than the ones we have already covered because it was bought before it was even released in the game. Back in December 2011, a man won an auction for a special sword that was scheduled to be released in the game Age of Wulin, but that sword would not be his until the Spring of the following year. He did, however, get a plaque in recognition of his winning bid so that is at least something he could have used to make his friends jealous.[4] Given that he spent $16,000 to own the weapon specifically crafted for the auction, the plaque seems like it was the least they could do.

Age of Wulin (Wushu in China where it was developed) is an MMORPG centered around the Wuxia-inspired lore from the Ming Dynasty of China. Players would conduct martial arts adventures and use various swords and other melee weapons to go on quests and make their way through the game. Its popularity is much higher in China than in Europe and North America, which is why a lot of players haven’t heard of it. 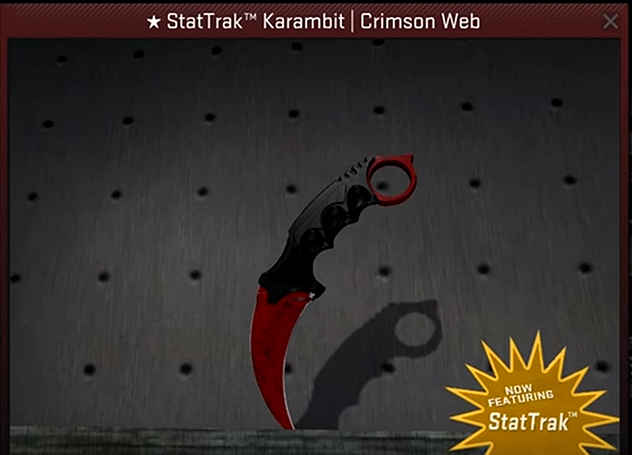 When it comes to most of the items on this list, they serve a purpose. Locations in online games can show a return on their investment and items like weapons and ships have their own intrinsic value to gameplay. Then, there are those items like outfits or skins that serve no purpose other than giving one player bragging rights over their friends and adversaries. Most people might be up for spending a couple of dollars here or there if they see a skin they really like, but then there is the player who spent $30,000 in BitCoin on a skin for a knife.[5]

To be clear, this skin does absolutely nothing for this player in terms of gameplay. It doesn’t make their weapon fly through the air seeking out people to stab or anything useful like that. It simply looks cool . . . and that’s subjective at best. For some reason, skins for Counter-Strike are highly sought-after, and while it may seem like a lot of money—who are we kidding, it is a lot of money—it is not that unusual for people to spend tens of thousands on similar items within that game. 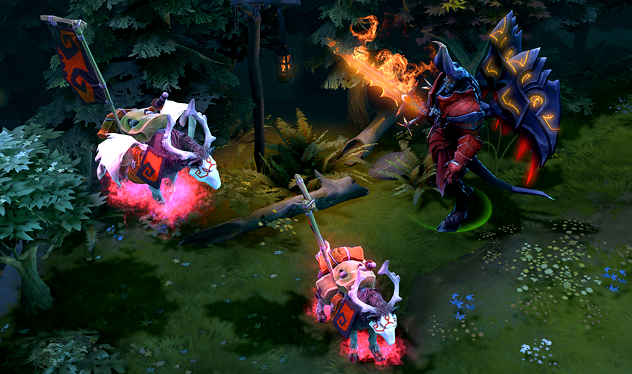 Most folks can probably go their whole lives without spending $38,000 in total on video games while one person decided to spend that much on a single in-game item. Most high-ticket items in video games are relegated to MMORPGs, but then there is the rare item sold in DOTA, a MOBA (Multiplayer Online Battle Arena).

In DOTA 2, players can utilize couriers, which are items that can transport things from your team to your base as well as from the base to your team. They are important, to be sure, but not so important that we can justify this expense. One player spent nearly forty grand of real money on the rarest War Dog in the game . . . and it’s pink.

If you are wondering why a pink dog went for so much money, the seller explained it by saying that it is simply comprised of a rare combination of the most sought-after courier types, color, and effect in the game. There are apparently only five similar items/couriers in existence so if you are a player and you think you have one, you might want to check, though it is thought to be worth only about $4,000 these days.[6] 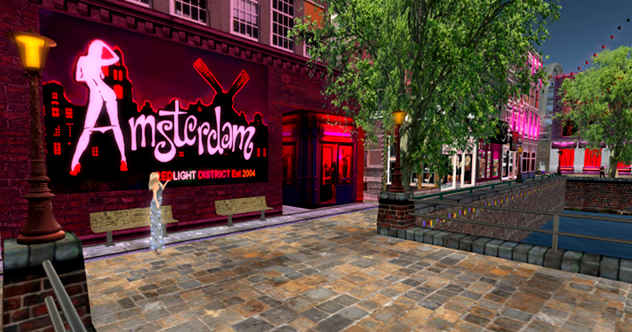 Online games have evolved a lot since they were first introduced, but one of the most popular ones from the early 2000s was Second Life. In the game, you created an avatar who lived and operated in a virtual world, which was not all that different from the real world. Case in point, they created a replica of the Dutch city of Amsterdam . . . then sold it on eBay.

As you probably already know, Amsterdam has a bit of a Red Light District where adults do naughty things for money. When the game introduced a version of the city, it should not surprise you to learn that they focused on that district, which was one of the most popular sites in the game.

What is most surprising about the sale of this virtual city is its cost: $50,000 to a lucky bidder believed to be in the Netherlands. There is not much else known about the person who won the auction, but we can imagine they have a certain affinity for beautifully rendered Dutch canals and streets.[7]

Entropia is an interesting MMORPG in that it allows players to pay and collect real-world currency from within the game. This means that if a player owns something like a club that people visit, they can charge an entrance fee or if they own a large area like an island where people come to hunt, they can charge a tax. Some players have made a lot of money playing this game, which is why it holds the top three places on this list. For the first Entropia entry, we have the Crystal Palace Space Station which sold for $330,000 in an online auction.[8]

Granted, that is a disgustingly large amount of money, but for the person who purchased it, it was most definitely an investment. For every shop and transaction that exists on the virtual space station, the owner was able to charge a fee or tax. This allowed for a return on the investment. While the property was entirely virtual, it was purchased in much the same way as any large land acquisition. $330,000 might seem like a massive price tag, but the next item on our list is nearly double that amount.

Club Neverdie is an incredibly popular nightclub in the Entropia Universe. It sits on a giant asteroid that orbits the planet Calypso and was the most expensive virtual item ever sold when it was purchased by John “NeverDie” Jacobs in 2005 for $100,000. Shoot forward a mere five years and Mr. Jacobs was able to see a small return on his investment when he sold the virtual location for a whopping $635,000 after breaking it up and selling one part for $300,000 and another to a gamer named John Foma Kalun for $335,000.[9]

Jacobs’s profit of more than a half million dollars proved that virtual properties could make a hefty return if they were properly managed. Because of the way Entropia works, the overall management of the property barely required much attention at all. Given that Jacobs had to take out a second mortgage on his real-life home in order to purchase the club, he took a risk, but it certainly paid off. 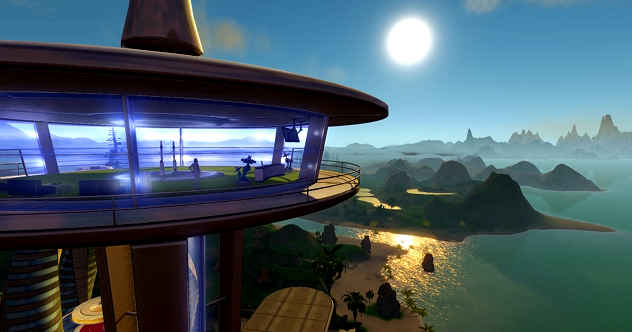 When Entropia launched, it all started on a single planet called Calypso. That planet was sold at auction for a whopping $6,000,000 to SEE Virtual Worlds. The planet was put up for sale by MindArk in 2011, and through the deal, SEE was to undertake the management of Planet Calypso and introduce two new planets to the Entropia Universe. From that point forward, all revenue earned through various means on the planets would funnel into their pockets.[10]

Six million dollars may sound like a lot of money to spend on a planet that doesn’t exist, but according to MindArk, planet Calypso was home to more than $428 million in player-to-player transactions in 2010, the year prior to the purchase. This was definitely an investment for the company who intended to take over management of the planet, but thanks to a failure to follow-through with all of their payments, MindArk terminated the deal later in the year and went on to sell $100 Land Deeds of the planet to whoever wanted them.