Space is unbelievably large and mysterious. It is unlikely that we will completely explore it before the end of humanity. Every once in a while, we discover some mysterious celestial body or observe some unexplainable anomalies.

We rarely have answers to these mysteries. All we do is brainstorm over what they could or could not be. Nevertheless, some are so weird that we have considered them as evidence of the existence of some intelligent life out there. In October 2017, astronomers detected a mysterious object floating through our solar system. They named it Oumuamua. It flew close to the Sun—reaching one-fourth the distance between the Sun and the Earth—before suddenly accelerating and escaping from our solar system.

Astronomers do not know what Oumuamua is or the cause of its sudden acceleration. Some astronomers have suggested that it is an abnormal comet. Others think it is an asteroid, a less than fully formed planet, a solar sail, or a large body of ice that broke off from a destroyed planet.

Shmuel Bialy and Avi Loeb of Harvard University suspect that Oumuamua is a solar sail, which is a solar-powered spacecraft. Bialy and Loeb think that the sail was built by aliens to explore our solar system.

However, other astronomers disagree. Zdenek Sekanina of NASA believes that Oumuamua is an icy comet without a tail. He suggested that Oumuamua lost the water and gases that would have formed its tail when it strayed too close to the Sun.

Gregory Laughlin and his team at Yale University agree that Oumuamua is made of ice even though they do not think it is a comet. They believe that it used to be part of an icy planet that was destroyed after straying close to a larger planet.[1]

Amaya Moro-Martin of the Space Telescope Science Institute thinks that Oumuamua is the remnant of a partly formed planet. He and his team suspect that the planet was still forming at the time it was flung out of its star system. If this is true, Oumuamua is the first less than fully formed planet we have found. 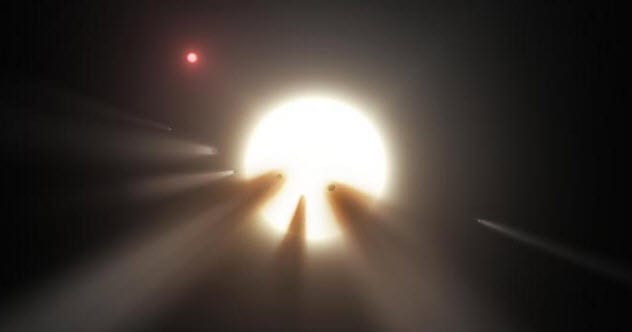 In 2011, scientists studying data captured by NASA’s Kepler spacecraft discovered that a star named KIC 8462852 frequently dimmed before brightening up again. The star is also known as Boyajian’s star or Tabby’s star.

Scientists proposed several causes for this bizarre behavior. Some suggested that the dimming was caused by a group of comets orbiting the star or some other unconfirmed materials in our solar system. Others think that it is caused by the dust around a black hole between Tabby’s star and Earth.

One group of astronomers believed that this effect was generated by a megastructure built by some intelligent life. They think that the star dimmed when the orbiting megastructure passed between the star and the Kepler space telescope. This suggestion generated the most curiosity, causing other scientists to try to determine the real cause of the dimming event.

Dozens of telescopes observed the star when it dimmed again in May 2017. Scientists soon discovered that this was not caused by a megastructure because such an object would block all colors of the star’s light from reaching the telescopes rather than simply dimming it. Scientists concluded that the dimming effect happened due to space dust orbiting the star.

However, they could not decide on the origin of the dust or confirm whether it is really dust. It also seems like the dust is being blown away from the star. This is why some scientists think that an undiscovered celestial body is creating more dust to orbit the star.

In 2016, Brian Metzger of Columbia University suggested that the dust was released from a planet or moon destroyed after straying too close to Tabby’s star.[2] Fast radio bursts (FRB) are strong radio signals we sparingly receive from space. Although scientists cannot confirm the origin of these signals, researchers think that they are emitted by exploding stars or neutron stars getting consumed by black holes. FRBs often disappear as soon as they appear. However, not FRB 121102.

Scientists have received over 150 signals from FRB 121102 since they received the first signal on November 2, 2012. Scientists have traced these FRBs to a distant galaxy three billion light-years away even though they cannot confirm the specific source.[3]

According to one theory, the signals are from a neutron star. However, another theory says that the FRBs could be emitted by technology used by aliens to power their spacecraft. Scientists do not believe that aliens deliberately sent these signals to contact us because they were released three billion years ago. Humans didn’t exist at the time, and Earth was filled with single-celled organisms. 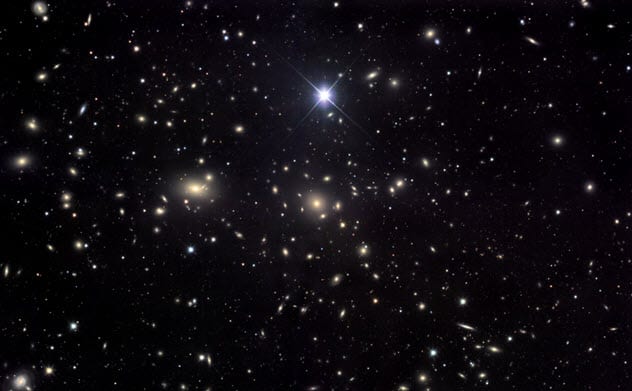 Astronomers have identified a group of distant galaxies traveling at a speed of over 1.6 million kilometers per hour (1 million mph). They do not know how or why the galaxies are moving that fast or where they are heading. Nevertheless, they have decided to call the mysterious motion “the dark flow.”[4]

Astronomers suspect that the dark flow is caused by some massive but undiscovered celestial body pulling the group of galaxies toward itself. The galaxies are moving away from Earth for now, but scientists do not rule out the possibility of this phenomenon reversing direction and moving toward Earth in the future. In June 2018, a bright flash suddenly appeared somewhere in the Hercules constellation 200 million light-years away. The flash was so bright that it was equivalent to the light emitted by 10–100 supernovae. Scientists called it AT2018cow or “The Cow.” It remained bright for two weeks before it started to fade.[5]

5 A Mysterious Signal From A Sunlike Star On May 15, 2015, astronomers operating the Russian telescope RATAN–600 detected a strange radio signal from a Sunlike star 94 light-years away. The star is called HD 164595 and is almost like our Sun. Both stars have similar chemical properties and temperatures. However, HD 164595 is 1 percent lighter and 100 million years younger.

Some astronomers suspect that the mysterious signal was released by aliens because the star system containing HD 164595 also has a Neptune-like planet called HD 164595 b. Scientists think the star system could contain other undiscovered planets, including an Earth look-alike.

However, other experts doubt that the signals are from aliens. First, the astronomers who detected the signals did not inform anyone for a whole year. Also, the mode of construction of the RATAN–600 telescope makes it difficult for it to pinpoint the exact location of a signal. So, the HD 164595 star system might not even be the source of the signal.

Besides, the aliens would have needed at least 50 trillion watts of energy to direct the signal to Earth. This is more than what the whole of humanity uses at any time, and it is unlikely that aliens would have rallied such massive energy just to direct a signal at us.[6] 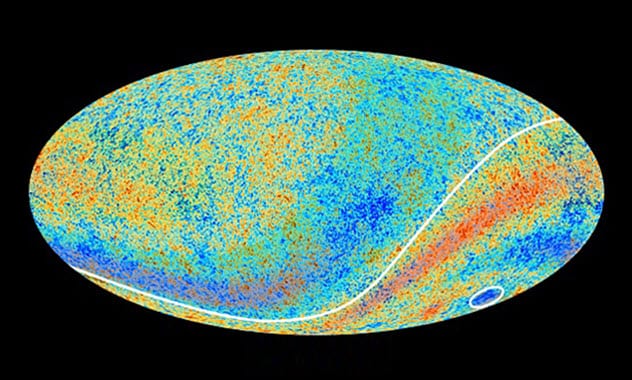 Space is filled with empty areas called voids. Some voids are so large that they are called supervoids. The average supervoid could contain 10,000 galaxies. However, they do not because they are usually not dense enough.

One of these supervoids is the one of the largest discovered objects in space. Located three billion light-years away, the supervoid is so large that objects will take hundreds of millions of years to travel through it—even if the object is traveling at the speed of light. Scientists required three-dimensional maps to locate and study this supervoid.

Curiously, scientists have discovered that the supervoid could also drain energy from lights traveling through it. It will also continue to get bigger as the universe expands.[7] In May 2009, British astronomers detected strange radio signals while monitoring an exploding star in the M82 galaxy. Radio signals from space often become stronger over several weeks before they begin to weaken. However, the signals from the M82 galaxy remained the same even though the source of the emission was moving incredibly fast.

Other scientists have suggested that the radio waves were actually emitted by a microquasar, a black hole that is formed when a huge star explodes. Microquasars are much smaller than the supermassive black holes at the center of galaxies, although they still have masses between 10 and 20 times the mass of our Sun.[8]

Some scientists believe that the mysterious waves, which do not contain X-rays, could not be emitted by microquasars, which send out both radio waves and X-rays. However, there are suggestions that the microquasar could be located in an unusual environment that eliminates the X-ray. Our universe is filled with leftover energy from the big bang which is called cosmic microwave background radiation (CMB). It covers every part of the universe except some areas called CMB cold spots. Scientists do not know how or why CMB cold spots exist. Some experts even think that the cold spots are actually one of the supervoids we mentioned earlier.

However, two astronomers from Durham University in England disagree. Tom Shanks and Ruari Mackenzie suggest that a CMB cold spot is the point of collision between our universe and an alternate universe. Shanks and Mackenzie made the claims after analyzing light emitted from thousands of galaxies in our universe.

They discovered that CMB cold spots were surrounded by several small voids instead of one huge supervoid. The small voids themselves were surrounded by small galaxies. While Shanks and Mackenzie agree that these could be caused by something explainable with physics, they believe that another plausible reason may be a collision between our universe and an alternate universe.[9] A supernova is the massive explosion that occurs when a star runs out of fuel. It often denotes the beginning of the end of a star’s life. However, scientists have discovered that this is not always so.

In 1954, astronomers observed the massive iPTF14hls star, which is 500 million light-years away, explode into a bright supernova. In 2014, they observed the same iPTF14hls star explode into a supernova again. Initially, astronomer Iair Arcavi thought that the 2014 supernova was caused by a different star that had somehow managed to travel to the location of the star that exploded in 1954.

However, he was surprised when he realized that it was the same star. Later, iPTF14hls was nicknamed the “zombie star” because it seemed to have returned from death. While iPTF14hls remains the only star to have ever been observed exploding twice, scientists believe that multiple explosions are common in stars with masses of at least 100 Suns.

Nevertheless, astronomers believe that iPTF14hls is dead for good this time. They could be wrong, though. Supernovae shine very brightly for three months before gradually becoming black. iPTF14hls shone brightly for over two years. We may need to wait a few decades before it explodes again.[10]

Read about more intriguing space mysteries on 10 Recent Space Discoveries No One Can Explain and 10 Intriguing Space Exploration Mysteries And Secrets.