There are many reasons why The Simpsons is rightly considered one of the greatest sitcoms (and one of the greatest TV shows period) of all time. It has remained at the forefront of pop culture due to its legacy of excellent storytelling, first-class jokes, and the predictions. So many predictions. Someone on The Simpsons writing staff must have a magical orb in his office to have guessed so many accurate things about the future. Look at Donald Trump becoming president or how The Simpsons somehow knew that their own parent company would one day be owned by Disney.

However, while many predictions could just be chalked up to luck, others seem to be the result of the writers paying attention to what was going on during the time. And then the same cultural trend pops up later. It’s less about being psychic and more about being really smart and clever. That’s why you end up with moments like these.

The Simpsons as a force of prediction accuracy really kicked off with gusto when the series accurately foresaw Donald Trump becoming president. In a 2000 episode titled “Bart to the Future,” we see a future where Bart is a bum, and Lisa is the first straight female president. There’s a curious line of dialogue where Lisa says, “We’ve inherited quite the budget crunch from President Trump.” Out of all the goofy celebrities The Simpsons could have chosen to make president, doesn’t it seem odd they landed on Trump?

Surely there are some sorcerers on 20th Century Fox’s payroll. Either that or Donald Trump actually did run for president in 2000, the same year the episode came out.[1] In 2000, he ran as a Reform Party candidate, and the writers obviously saw an opportunity to point out how incredibly insane it would be if Trump actually became president. 2000 wasn’t even the first time Trump toyed with the idea of running the country. He’d actually been teasing it since 1988. 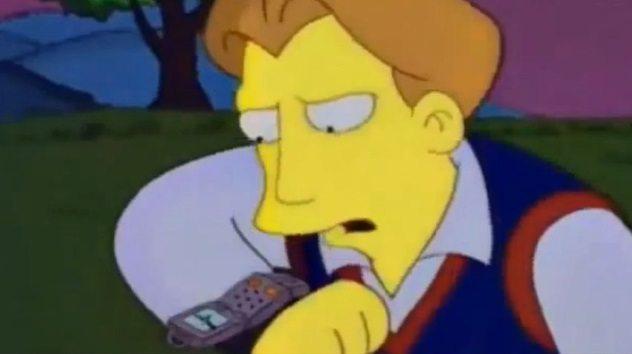 The 1995 episode “Lisa’s Wedding” offered another potential glimpse into the Simpsons’ future. And wouldn’t you know it; The Simpsons predicted another amazing piece of technology. In the episode, Lisa’s fiance uses a watch that’s supposedly eerily similar to what would ultimately become the Apple Watch. The likeness seems to have taken off due to a spot in a Mashable article.

First of all, the watch seen in the episode doesn’t look anything like the Apple Watch. The Simpsons instead opted for a literal phone attached to a wristband, which actually has more in common with the old-school phone watch used by Dick Tracy.[2] So this wasn’t so much The Simpsons thinking that phone watches would one day become an actual thing. If anything, the writers were just paying homage to the classic detective.

The Simpsons – Eat Up Martha

While we’re on the subject of technology, many people also believe The Simpsons predicted the rise of autocorrect. It’s the reason why you can only tell people you are so “ducking” happy instead of . . . well, you know. The episode in question sees Dolph trying to write down a message to himself to “Beat up Martin,” only to have it changed to “Eat up Martha” instead.

Similarly to the Trump point, The Simpsons was merely poking fun at an idea that was relevant back then, and we just still deal with it today. At the time (the mid-1990s), Apple had come out with a device known as the Newton, which had an incredibly shoddy touch-form input.[3] As a result, it became a laughingstock of the tech industry and resulted in many people being unable to properly write down messages without the Newton screwing it up. Apparently, we can put a man on the Moon, but we can’t get a phone that knows how to spell correctly.

It should go without saying that voting machine problems have been around ever since there have been voting machines. A report in The New York Times in 2008 stated that in that year, approximately 143 voting machines went on the fritz. The problems ranged from printer jams to the machines mysteriously powering down with no explanation. Considering the wide margins Obama won by in both 2008 and 2012, he probably didn’t have to worry too much if Homer Simpson’s vote went toward someone else. 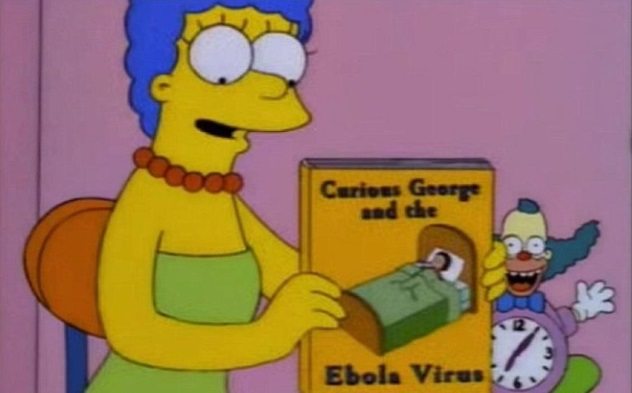 Let’s reference this entry right at the top: No, The Simpsons did not predict the creation of a brand new disease like some people on the Internet seem to think.[5] In 1997, there was an episode where Marge offers to read a book to Bart. The book in question is called “Curious George and the Ebola Virus,” with a (hopefully) sleeping George on the cover in bed. In 2014, Ebola would strike fear and panic into the hearts of Americans who didn’t really need to worry about it in the first place.

The Ebola virus was first discovered in 1976. It was found in the Democratic Republic of the Congo, and it has ravaged various countries of Africa for decades since. Most Americans probably did not realize Ebola was even a thing until a few people in the United States came down with the disease. This seems like a case where a lone Simpsons writer was trying to teach the American public about the disease so that we could all learn a little something. Too bad it took over a decade for the message to come across.

Lady Gaga has become one of the most famous pop stars in the entire world, so it comes to no surprise that The Simpsons would dedicate an entire episode to her. However, the strange thing seems to be that people assume the episode predicted Lady Gaga’s performance at the 2017 Super Bowl. Even CNN explicitly used language correlating the episode specifically to the Super Bowl.

The episode doesn’t make any reference to a Super Bowl of any kind. The performance in question occurs when Lady Gaga first shows up in Springfield. The main similarity people seem to draw between the two is that Lady Gaga flies through the air on a wire. And pop stars flying through the air in a feat of acrobatics is nothing new. Just ask P!nk.[6]

In the classic 1993 episode, “$pringfield (Or, How I Learned to Stop Worrying and Love Legalized Gambling),” Mr. Burns brings out a Siegfried and Roy parody duo who have white tigers in their show. While the episode played the attack for laughs, the same thing unfortunately happened to the real Roy Horn in 2003, years after the episode aired.[7]

While all the other entries on this list have some explanations for where The Simpsons writers got the ideas for such jokes, this one has a slightly different explanation:

While it’s definitely unfortunate what happened to Roy, they were live tigers, and no matter how well-trained an animal is, all it takes is one bad day to set it off. You can watch Blackfish if you want even more examples of this kind of thing happening. The Simpsons merely saw what we all knew was going to happen eventually. 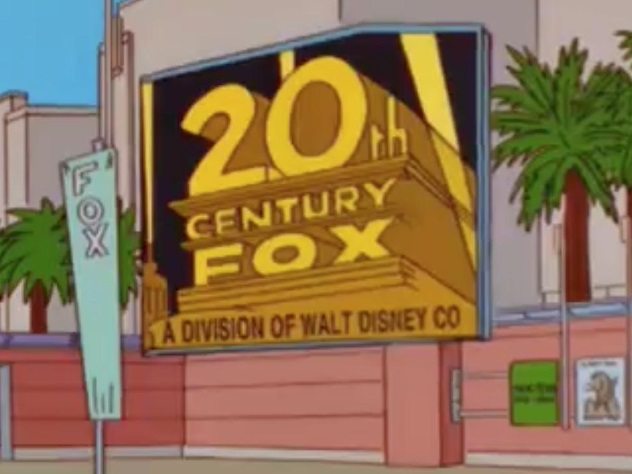 This is one of the more recent predictions to come to light. In a 1998 episode, there is a small sight gag when the Simpsons visit Fox Studios so that Homer can make a movie. There’s a sign in the background featuring the 20th Century Fox logo along with the tagline: “A Division of Walt Disney Co.”[8] As we all have recently seen, Disney did indeed buy Fox, which means Disney now technically owns The Simpsons. Life’s funny that way.

Fox is only the latest in a long line of media divisions gobbled up by Disney. The giant company also owns ESPN, Lucasfilm, Marvel, ABC, A&E Networks, and much more. It’s entirely possible that in 1998, the writers were aware of how much Disney was buying and thought it would be amusing to speculate whether Disney would one day own Fox. How right they were. 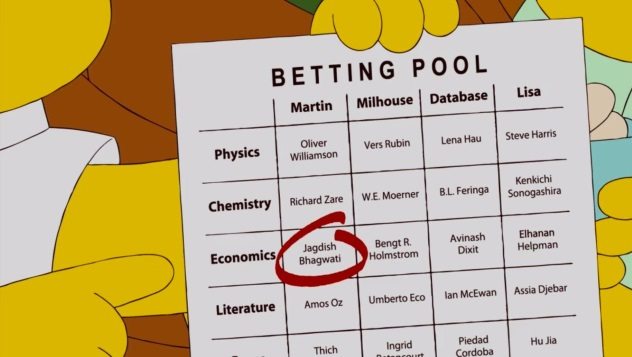 A Season 22 episode of The Simpsons has a sight gag of Lisa, Martin, and Milhouse betting on who would win what Nobel Prizes. It turns out that Milhouse actually got one of them right.[9] In 2016, Bengt R. Holmstrom did, in fact, win the Nobel Prize for economics, just like they predicted. We wonder how much money Milhouse ended up getting out of that deal.

If you actually look at the picture, you will notice a lot of names on that card. Those are all real people, and they’re all real people who have done work that would absolutely qualify them to win Nobel Prizes. In this instance, The Simpsons merely played the odds and wound up getting one right, which was all they needed to show the world that The Simpsons is staffed by psychics.

1 Mass Of The Higgs Boson 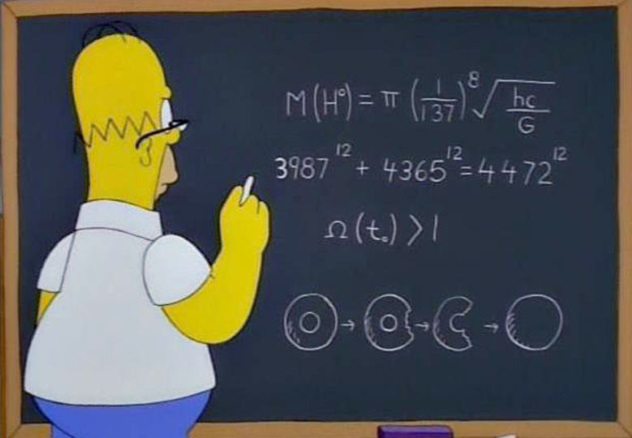 We have to admit, this prediction almost impressed us at first, considering how monumental it seems. In a 1998 episode, Homer becomes an inventor and writes down an equation on a blackboard. Most people may be too distracted by the slowly decaying doughnut at the bottom of the board, but the top nearly accurately predicts the real-life mass of the Higgs boson, which is an elementary particle crucial in the understanding of particle physics. Fifteen years later, scientists discovered that what Homer wrote on the board was very close to the actual mass of the particle.

So how would some TV writers know about this in the first place? We may have Al Jean to thank for this. Jean was a former showrunner on The Simpsons, and unbeknownst to many fans, Jean actually attended Harvard when he was only 16 years old. It’s not outside the realm of possibility that Jean knew about the equation and felt like creating the world’s smartest, most intricate Easter egg of all time.

Top 10 Amazing Actors Who Are Always In Awful Movies